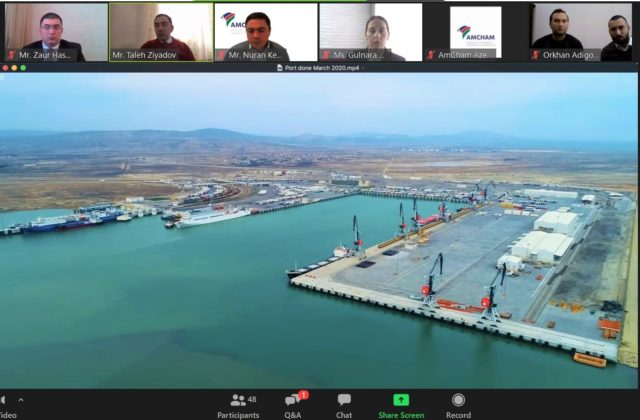 Director General of the Port of Baku Dr. Taleh Ziyadov held an online meeting with members of the American-Azerbaijani Chamber of Commerce. Members of the Azerbaijani-American Chamber of Commerce (AMCHAM), which unites about 300 companies, were informed that 2020 was the most memorable year in the history of Azerbaijan’s independence, and under the leadership of President Ilham Aliyev, our victorious army destroyed the enemy and put an end to the occupation of Azerbaijani lands. Director-General Taleh Ziyadov said that the November 11 agreement, which confirmed the victory of Azerbaijan, also required the opening of communication lines of the region. This will further expand the opportunities for Azerbaijan to become a regional transport and logistics hub. At the same time, it will reduce the possibility of future conflicts and escalations. Referring to the results of 2020, Director-General Taleh Ziyadov said that despite the COVID-19 pandemic, the turnover of the Port of Baku has increased by 20%. The number of large vehicles (TIRs) and containers overturned in that year was at a record level for the last 30 years. During the reporting period, the number of large vehicles (TIR) increased by 28% compared to the same period last year and amounted to 43,218. The number of exported containers increased by 15% and reached 40,345 containers in TEU equivalent.

The volume of cargo transported at the dry cargo terminal increased by 2.8 times and amounted to 711.7 thousand tons. Thus, compared to the last 5 years, there has been an increase of 5 times in the volume of large vehicles (TIR), 3 times in containers, and 3.5 times in the volume of cargo transported in the dry cargo terminal. It’s been mentioned that on January 15, 2021 the Port of Baku signed a memorandum of understanding with Europe’s second largest Port of Antwerp and its APEC Port Training Center. According to the document, the center will provide training on topics such as environmental and occupational safety, improvement of trade and operational processes, as well as innovation and digitalization. It was noted that the participants will be able to get acquainted with the activities of the Antwerp and North Seaports, the international logistics center and the customs service of the region for 5 days.

Director-General Taleh Ziyadov said that the trainings covered a wide range of areas and invited AMCHAM members to participate in the trainings. It was noted that the “APEC Port Training Center” has been operating since 1977 and is a world-renowned center. Since its inception, more than 15,000 participants from around the world have benefited from APEC’s professional training. The Director-General also briefed the audience on the Port of Baku’s development strategy for the next 2 years, agreements reached with leading logistics hubs and transport companies in Asia and Europe, and innovations in the country transport sector.