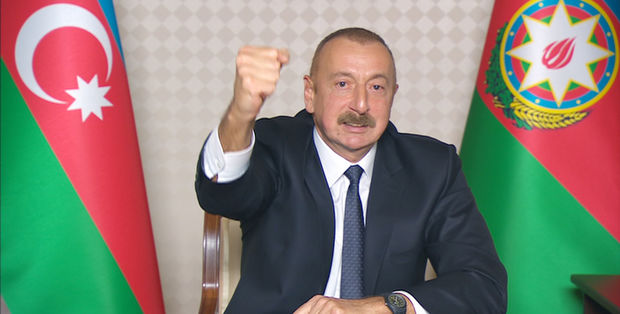 On September 27, the Azerbaijan army under the leadership of Commander-in-chief Ilham Aliyev started the glorious path towards preventing Armenia’s provocative actions, its plans for the occupation of new territories, and the liberation of our occupied lands.
Report informs that as a result of the 44-day military actions, the Azerbaijani army destroyed the armed forces of Armenia that have been built for 30 years and managed to liberate Jabrail, Gubadly, Zangilan, Fuzuli regions, a greater part of Khojavand and several villages of the Lachin district;

After 28 years of longing, on November 8, Shusha, which was of great importance and symbolic meaning for the people of Azerbaijan, was liberated from occupation. As military experts, as well as the Armenians themselves, say, ‘whoever controls Shusha, controls Karabakh.’

Immediately after the liberation of Shusha, on November 9, President Ilham Aliyev informed the public that 71 villages, one settlement, and eight strategic heights had been liberated from occupation;

Shusha’s capture completely disarmed Armenia, all its maneuverability collapsed, and its tactics of deceiving the country and the world community lost their significance. The enemy had no choice but to raise a white flag and capitulate. The world military history also shows that the party that suffered such losses is considered defeated, surrenders, and military operations are suspended;

The statement signed by the Presidents of Azerbaijan, Russia, and the Prime Minister of Armenia means Armenia’s capitulation. Realizing its defeat on the battlefield, Armenia accepted the terms set by President Ilham Aliyev from the first days of the conflict and agreed to surrender. President Ilham Aliyev has repeatedly stated, including in a recent interview with the BBC, that military operations will be halted if Armenia undertakes to withdraw its troops;

In a joint statement, Armenia undertakes to withdraw from the occupied Azerbaijani regions of Agdam, Kalbajar, and Lachin within the next 20 days. As a result, our major districts will be liberated from occupation without bloodshed and losses in the coming winter. Russian and Turkish peacekeepers will arrive in the area synchronously with the withdrawal of Armenian troops from the occupied territories of Azerbaijan;

There is no longer a concept of the contact line between troops. The ceasefire is currently defined by the positions of the Armenian and Azerbaijani armed forces;

Russian and Turkish forces will be deployed in the area in a limited contingent in peacekeeping status. The period of deployment of peacekeepers is set at three years;

President Ilham Aliyev has always stated that Turkey should be involved in the process of resolving the conflict. Turkey will also take an active part in a joint mission to monitor the ceasefire. The participation of the Turkish military in the process indicates that any action against the interests of Azerbaijan will be prevented;

Unlike Armenia, Azerbaijan is not at war with civilians and does not intend to carry out ethnic cleansing. From a military point of view, the capture of Khankendi and surrounding areas was not difficult for the Azerbaijani Army. Armenian propaganda was also waiting for this moment to accuse Azerbaijan of ethnic cleansing;

Azerbaijan has always stated the possibility of peaceful coexistence in Nagorno-Karabakh. President Ilham Aliyev has repeatedly stated that Azerbaijanis and Armenians live together in different countries globally, and no unpleasant situations occur between them. Therefore, Azerbaijan has always supported the coexistence of both communities in Nagorno-Karabakh;

As part of this process, Nakhchivan is also released from the blockade. Russia undertakes to establish a corridor with Nakhchivan through the territory of Armenia;

Armenia could destroy all military equipment of the enemy and deal a severe blow to its personnel in a short period by applying a novelty strategy and using the most modern weapons, and with minimal losses.
The highly professional operation aimed at liberation carried out by the Azerbaijani Army will lead to significant changes in the doctrine of wars worldwide. The liberation of Shusha in high mountainous conditions is the brightest page in Azerbaijan’s military history;

Armenia and its supporters put diplomatic and political pressure on Azerbaijan to suspend military operations. President Ilham Aliyev demonstrated his firm political will and courageously resisted all pressures, without backing down from his principled position. About 30 interviews given by President Ilham Aliyev to the world’s leading media shattered the attacks on our country in the global information space;

– The plans of Armenia and its supporters based on the occupation and gradual annexation of Azerbaijani territories were thwarted. A new political reality has emerged in the region that meets the interests of Azerbaijan. It ended the almost 30-year-old longing of Azerbaijani citizens for their ancestral lands. President Ilham Aliyev once again demonstrated that he knew what, how, and when to do;

– This victory ended the defeated people’s syndrome about Azerbaijanis and restored the self-confidence of the nation. The whole world has seen that the Azerbaijani people will never reconcile with defeat and sooner or later achieve their goal. The robust state and the strong military strategy implemented by President Ilham Aliyev over the past 17 years, is the main reason behind the liberation of our lands from occupation.