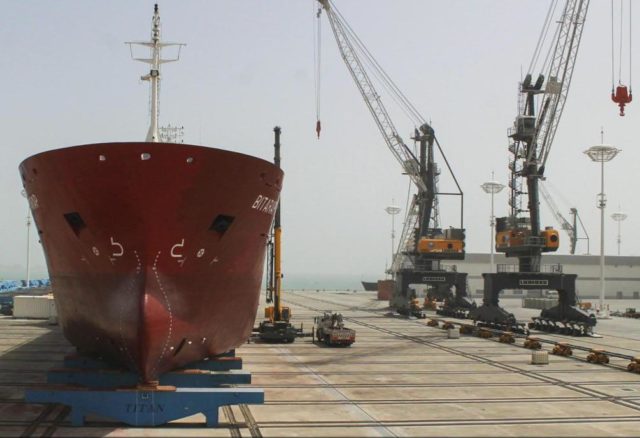 In August, the Russian Embassy in Turkmenistan issued a press release from the Committee for External Relations of St. Petersburg on the positive results of negotiations with the Turkmen side on cooperation in the field of shipbuilding.

It is reported that this issue was discussed during the negotiations in the format of a video conference of the Deputy Chairman of the Committee for External Relations of St. Petersburg A.D. Khlutkov. and Deputy Chairman of the State Operator of Sea Routes and Seaports in Turkmenistan, the Turkmendenizderyaellary Agency Annadurdy Kosyaev.

The meeting was also attended by the vice-president of JSC “USC” for technical development Boytsov V.V., President of NP “Group of design and construction companies” Vozrozhdenie “Bukato I.V., Trade representative of the Russian Federation in Turkmenistan Elizarov A.Yu., representatives of the Ministry of Foreign Affairs of Turkmenistan and the Embassy of the Russian Federation in Turkmenistan, general director of the Balkan shipyard Seyitguly Baiseidov and director of the Sea Commercial Fleet LLC Yusup Guratov.

Following the meeting, an agreement was reached on signing a memorandum of cooperation between the United Shipbuilding Corporation JSC and the Balkan Turkmen shipyard. It is known that after the signing of the document, work will begin on the supply of ships to Turkmenistan, which will be assembled using the shipbuilding facilities of St. Petersburg.

It should be noted that according to the latest data, St. Petersburg is one of the three leaders in cooperation with the Turkmen side, along with the Republic of Tatarstan and the Astrakhan region. In the 1st quarter of 2020, the trade turnover of St. Petersburg with Turkmenistan increased by 78.2% compared to the same period last year and amounted to about USD 2.6 million. Imports grew many times over (+ 290%) and amounted to USD 525 thousand (92nd place). The growth in exports is due to large deliveries of products from the group “ships, boats, floating structures”.

We also remind that the conclusion of agreements between St. Petersburg and Turkmenistan was preceded by a long preparatory work.

Back in October last year, a delegation from Turkmenistan, headed by the trade representative of Russia in Turkmenistan, Alexander Elizarov, visited the Nevsky shipbuilding and ship repair plant, located in the city of Shlisselburg, 40 kilometers from St. Petersburg.

Then the delegation included representatives of shipyards, ports, transport and logistics and transport and forwarding companies of Turkmenistan. The purpose of the meeting was acquaintance with the activities of the enterprise, inspection of production facilities, visiting ships under construction at the plant.

In October, the Turkmen delegation got acquainted with such projects as: multipurpose dry-cargo motor ships of the Volgo-Don max class of RSD59 project, multifunctional rescue tug vessels with a capacity of 2.5-3 MW of MPSV12 project, cargo-passenger vessels of PV22 project.

The attention of the Turkmen side to cooperation with Russia in the field of shipbuilding and ship repair is largely due to the interest of Ashgabat in the development of the field of sea and river transport. After the commissioning of a new International Seaport in the city of Turkmenbashi, the country’s leadership expects to bring economic and trade cooperation with Asian and European countries to a higher level by optimizing transport flows in the region. In addition, the opening of a shipbuilding and ship-repair plant within the port of Turkmenbashi stipulates the desire of the Turkmen side to a productive exchange of experience with Russian shipbuilders.