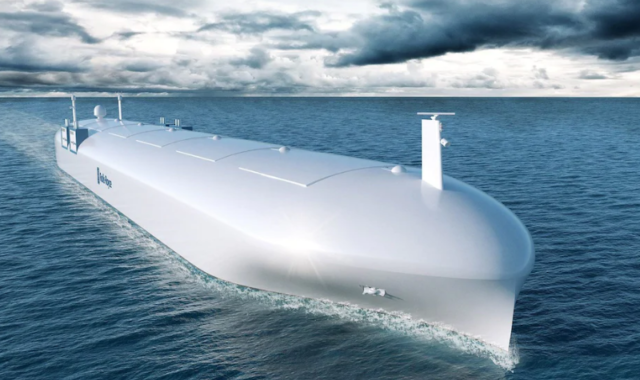 ‘We are at the mercy of the weather,” smiles Don Scott, standing on a slender steel hull. “If the sea is like glass it could take two weeks, but the north Atlantic weather is going to have a lot to say about that. It could take six.”

Here on a hillside industrial park above Plymouth, Britain’s boldest foray into robot shipping is taking shape. On Sept 16, the Mayflower Autonomous Ship, a 15-metre-long steel trimaran, will slip into Plymouth Sound to prepare for a pioneering voyage: the first unmanned transatlantic crossing powered by artificial intelligence and solar energy.

Barring an accident, no human beings will be involved in the 3,220-mile trip, which will mark the 400th anniversary of the original Mayflower crossing in 1620. That carried over 130 people, including five who perished, and lasted a gruelling 10 weeks.

The consortium of companies behind the project, led by Promare, a marine research organisation, and including IBM and M Subs, a Plymouth-based submarine manufacturer, have high hopes for the technology, which uses algorithms and computer vision to navigate a safe course. Details of the project will be announced this week during London Tech Week.

“This is a disruptive technology,” says Scott, director of engineering at Marine Ai, which is also involved.

While aerial drones and driverless cars have captured more attention, experts believe autonomous shipping is on the verge of a breakthrough.

With investment flooding in from big companies including Rolls-Royce, Honeywell, ABB and Wartsila, one forecast from Allied Market Research suggests that the autonomous ships market could be worth $135bn (£102bn) by 2030. “Doing this on a ship is infinitely easier than in a car,” says Brett Phaneuf, president of M Subs and the driving force behind the Mayflower project.

In principle, autonomous technology is better-suited to marine transport than road or air, he explains.

With lower speeds, less risk of collisions on the open ocean and detailed mapping available of hazards like shorelines, reefs and rocks, enthusiasts believe robot ships are poised to reshape the industry. A range of potential applications are opening up – from small freight barges to passenger ferries, robot icebreakers and tugboats, to trawlers and scientific research vessels.

“We are at a tipping point and Covid-19 has been a big accelerant,” says Jonathan Batty of IBM.

After all, it’s not just the cruise ship business which has suffered from the pandemic. Research vessels, cargo and fishing operators are all grappling with the threat to crews. Many have been forced to halt operations and autonomous tech offers a solution.

“It’s a lot lower-cost than sending a research vessel with 60-70 people on board for a two-month trip,” says Rosie Lickorish, an IBM software developer and oceanographer.

Scientists have been using subsea gliders – torpedo-like autonomous vehicles – to collect samples and conduct oceanographic or meteorological research for years.

But the machines are now cheaper and increasingly powerful, able to travel hundreds of miles into the open ocean for 60 days at a time before returning. In future, they could be refuelled by autonomous motherships at sea, allowing them to operate continuously.

As well as lower costs from dispensing with human crew, autonomous vehicles offer other advantages. Robot ships don’t need to rest their crews and can navigate around the clock.

An Allianz report from 2018 said 75pc of shipping insurance losses per year – worth $1.6bn – were caused by human error, including tired or distracted crew.

On conventional ships, accommodation, cooking, washing and toilet facilities take up space and consume energy. Fully autonomous vessels make better use of space and can be redesigned.

IBM’s Batty conjures up a brave new world where autonomous barges could soon be ferrying freight around Britain’s coasts to cut the number of polluting diesel trucks on the roads.

Canals and inland waterways could be repurposed too, with freight vessels potentially equipped with aerial drones for last-mile deliveries to homes and businesses, he says.

Some projects are already under way. Amsterdam is developing autonomous boats to ferry people and collect rubbish, while unmanned electric barges for freight are being developed to exploit the Low Countries’ extensive canal system. In Norway and Finland, autonomous passenger ferries are already plying the seas. Smaller vessels with standardised uses will be automated first, says Wartsila’s Thomas Pedersen.

“The bigger the ship, the lower the crew cost as a percentage of the total, so arguably the weaker the business case for automation becomes,” he says. Either way, not all of the applications are benign.

In 2016, the US navy deployed its first autonomous warship, the 40ft Sea Hunter, which can patrol for months without a crew. The Royal Navy began testing its first unmanned Pacific 24 boat, from BAE Systems, in June.

Travelling at up to 44mph, and in future equipped with machine guns, such vessels could be used to patrol smuggling routes for people, drugs or weapons – perhaps including the English Channel.

Critics fear the impact on jobs if many of the world’s mariners are replaced by robots. Phaneuf brushes aside such concerns: “We are not taking jobs away but creating new technology jobs to build and maintain these vessels.”

The biggest challenge may be red tape. The rules which govern the sea were written long before autonomous tech. “The shipping industry does not move very quickly,” says IBM’s Batty. “Maritime law is all based on having a captain on the bridge. So if you have an AI captain, that creates problems.”

That, however, is changing. The International Maritime Organization is examining the issue, and national governments including Norway, Holland and the UK are drafting new rules to support innovation.

With its strong maritime and naval heritage, Plymouth is eager to gain a slice of the action by creating the so-called Smart Sound, a 1,000 sq km (386 square mile) testing ground for autonomous technology.

“We have a critical mass of organisations in Plymouth,” says Dr James Fishwick of the Plymouth Marine Laboratory. “The South West has a lot of technology and leadership.”

With growing interest globally, it could be lucrative too.