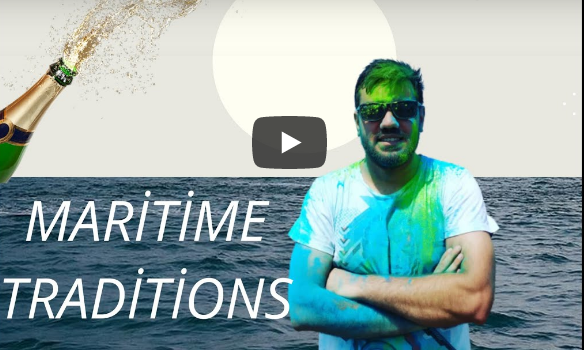 A sail-by salute (or near-shore salute) is a salute performed by bringing a ship close to shore to salute those on land. Often the salute is performed for a crewmember’s family.

Later it is performed for the passengers of kruiz ship in order to see land closer Manning the rail is a method of saluting or rendering honors used by naval vessels. the crew are stationed along the rails and superstructure of a ship when honors are rendered.

The line-crossing ceremony is an initiation rite that commemorates a person’s first crossing of the Equator As they cross the equator, sailors gather on the board and dance to celebrate Or set up scenes representing the arrival of King Neptune.

Ceremonial ship launching is the process of transferring a vessel to the water The process also involves many traditions intended to invite good luck, by breaking a sacrificial bottle of champagne over the bow as the ship is named aloud and launched