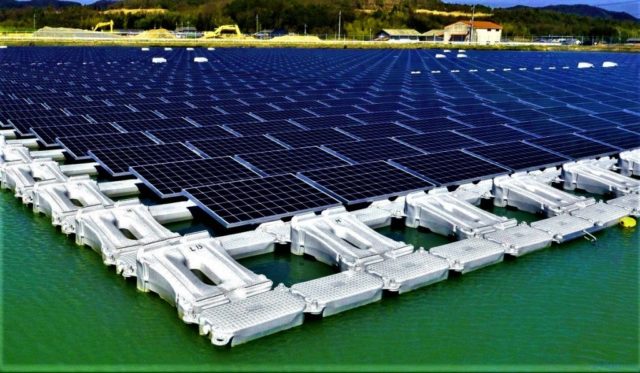 Work is underway in Azerbaijan to start a pilot project on installation of solar panels on the surface of Lake Boyukshor near Baku on an the area of 800 square meters, the Energy Ministry reported on July 13.

The pilot project is titled “Knowledge sharing and technical assistance for the development of floating solar panels” and is carried out with the support from the Asian Development Bank.

During the meeting, held on July 13 on this topic, discussions were held to identify and evaluate local potential contractors and to enhance the use of the facilities.

Azerenergy JSC was asked during the meeting to evaluate the possibility to connect to the electricity network through the existing and planned 220/110/35 kWh, located near lake Boyukshor and provide technical specifications for connection.

It should be noted that in the first half of 2020, a bill was submitted to the Cabinet of Ministers on the use of renewable energy sources in the production of electricity, prepared in accordance with the order “On accelerating reforms in the energy sector of the Republic of Azerbaijan”.

Within the framework of cooperation between the Ministry of Energy and the European Bank for Reconstruction and Development, the project “Support for renewable energy auctions in Azerbaijan” continues. Power Purchase Agreement (PPA), Connection Agreement (CA) and auction rules were discussed, as well as other documents related to the auction prepared by the consulting company.

Earlier it was reported that, the final report of SNC-Lavalin’s Atkins on the results of research on improvement of small hydropower plants in Azerbaijan and effective use of hydropower potential of rivers was submitted to the Ministry of Energy.

The number of companies signed a memorandum of understanding with many international companies to strengthen cooperation in the use of renewable energy sources and encourage future investments in this area has reached 11. Signatory companies: Tekfen Inshaat from Turkey, Avelar Solar from the Russian Federation, Masdar from the United Arab Emirates, Equinor A.S from Norway, Total Eren from France, BP from the United Kingdom, ACWA Power from Saudi Arabia, Japanese Mitsui & CO, French Lucia Holding, Italian Ansaldo Energia and United Arab Emirates Al-Maktub.

In accordance with the executive agreements signed between the Ministry of Energy and ACWA Power of Saudi Arabia and Masdar of the United Arab Emirates, representatives of the relevant governmental agencies visited the areas where 240 MW wind power plants and 200 MW solar power plants will be built.

As it was reported earlier, with the participation of an international consulting company, draft documents on “Energy Purchase Agreement”, “Investment Agreement”, “Agreement on joining the transmission network” and “Land Lease Agreement” were prepared and presented to investors.

It should be noted that in order to expand the use of renewable energy sources in Azerbaijan and to achieve its goals, based on international experience and to determine the best options for gradually increasing the share of renewable energy over time, the German company VPC began to develop proposals.

Proposals will be prepared to increase the share of renewable energy in generating capacity to 30 percent by 2030 by conducting an appropriate analysis in the electricity grid in order to examine the feasibility of connection by periods, identify integration and strengthening measures, and technical recommendations for connecting pilot projects.

The proposals are to be submitted by the company to the Ministry of Energy in the near future and then agreed upon and submitted to the Cabinet of Ministers after their completion.