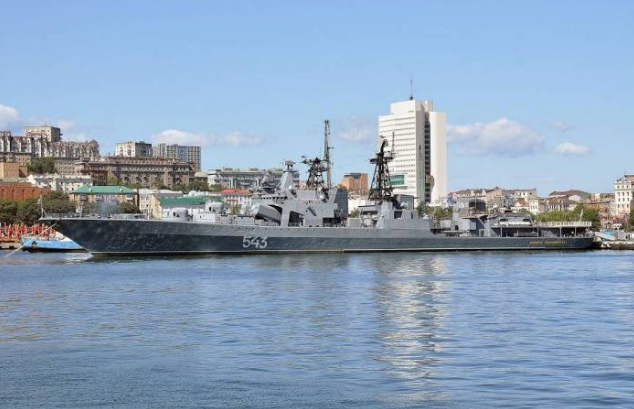 The frigate joined the Russian Navy in 1986 and is currently completing an upgrade at Dalzavod Shipyard. Most warships of the project do not have attack missiles, as their mission was to hunt submarines.

The Marshal Shaposhnikov is now a universal ship. Over 20 percent of constructions were dismantled and built from scratch to accommodate modern equipment and missiles. It will have vertical launchers for Kalibr missiles. They can also fire hypersonic Tsirkon missiles. The frigate is also armed with 100mm universal artillery A-190-1 gun made with stealth technologies. The warship will retain its antisubmarine capabilities.

The modernization dragged. The Marshal Shaposhnikov had to return to the Navy in late 2019, expert Dmitry Boltenkov said. “The Navy undertook such a modernization half a century ago last time. A similar amount of work was done in 1970s on destroyers of project 57-bis which were rebuilt into big antisubmarine ships. The transformation of a warship is a complicated process with numerous surprises to rectify. It may be exposed that metal constructions look good but are rusty and have to be replaced. It may be decided to install better equipment which will trigger new adjustments,” he said.

The same upgrade is in store for Pacific fleet warships. Their modernization will be faster due to the experience obtained on the Marshal Shaposhnikov, the expert said.

The Russian Navy needs blue-water warships as few are built, expert Mikhail Barabanov said. “The Marshal Shaposhnikov will be upgraded from an antisubmarine ship into a multirole warship. It will be able to engage in a broad range of combat missions. The huge volume of work means the frigate will hardly return to the fleet in 2020,” he said.

The big antisubmarine ships have long been the backbone of surface forces. They participated in humanitarian operations outside Russian territorial waters. The Marshal Shaposhnikov was the most active participant in such missions.

In 1990, it evacuated Soviet citizens from the civil war in Ethiopia. In 1990-1991, it was in the Gulf to monitor the Desert Storm operation. In May 2010, the Marshal Shaposhnikov freed the Moskovsky Universitet tanker seized by Somali pirates in the Gulf of Aden, the Izvestia said.