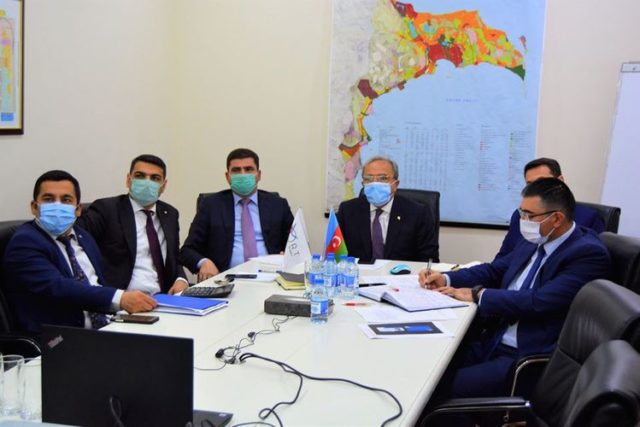 On May 20, at the initiative of the Port of Turkmenbashi and embassy of Turkmenistan to Azerbaijan, an online video conference on the joint activities of 4 Caspian Ports during the COVID-19 pandemic and other issues of mutual interest took place. In his introductory speech, the Ambassador of Turkmenistan to Azerbaijan, Mr. Mekan Ishanguliyev highlighted the crucial role of strategically important Middle Corridor in light of curbing COVİD—19 pandemic. Mr. Ambassador noted that due to the pandemic, the volume of cargo handled along the corridor has increased significantly. Nevertheless, the close cooperation between the ports of Azerbaijan, Turkmenistan and Kazakhstan resulted in the movement of cargo without any delays.

On April 10th, during the Extraordinary Summit of the Turkic Council on the initiative of the President of the Republic of Azerbaijan, the current Chairman-in-Office of the Turkic Council H.E. Ilham Aliyev and on May 4th, again on the initiative of Chairman of the Non-Aligned Movement (NAM) Mr. Ilham Aliyev, a Summit of the NAM’s Contact Group was held. In both meetings, it was emphasized that the Middle Corridor works with no limitation and in its full capacity.

Deputy Director-General of the Port of Baku, Mr. Vahid Aliyev noted that the Port operates in a 24/7 intensive regime and is constantly being disinfected. It is stated that in order to prevent the spread of COVID-19, all trucks entering the Port of Baku enter a special “temporary waiting zone” created inside the Port. In the area, laboratory tests are first taken from them and their health is monitored. Drivers remain in the temporary waiting zone until the test results are received. Drivers that have not been tested positive for the virus enter the “sterile (clean) zone” of the Port. It was noted that the same approach is applied at the “Red Bridge” customs border checkpoint, wherefrom most of truck drivers arrive to the Port of Baku, and together with the Port employees, the State Customs Committee personal, doctors of TABIB and the Reference Hospital conduct the testing of drivers. Those drivers who test negative, are being escorted to the Port by traffic police.

At the end of online conference, it was also noted that the Port of Baku shared its experience in combating COVID-19 with the ports of Kazakhstan and Turkmenistan.

Mardan Meretkylichev, Deputy Director of the Turkmenbashi International Sea Port, Makhammetnur Ovezov, Consul-General in Aktau and Sabir Rzayev, Head of the Economic Cooperation section of the Ministry of Foreign Affairs of Azerbaijan participated in the online discussions as well.