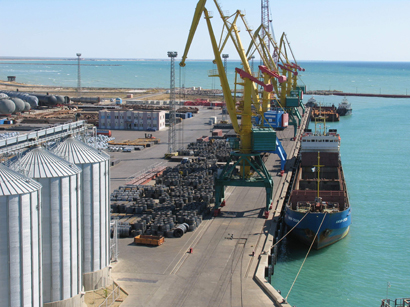 The volume of cargo transshipped to Azerbaijan via Kazakhstan’s Aktau and Kuryk ports amounted to 475,000 tons of cargo in 1Q2020, which is 8 percent less than during the same period of last year (449,000 tons), a representative of Kazakhstan’s Ministry of Industry and Infrastructural Development told Trend.

The ministry said the volume of cargo transshipped to Azerbaijan via Kazakhstan’s Aktau and Kuryk ports amounted to 1.6 million tons in 2019, which also is almost 10 percent less than in 2018 (1.8 million tons).

The ministry official said that ferry cargo is being transported by ferries under Azerbaijani flags via use of Kuryk and Baku ports’ ferry complexes.

Currently there are three operating seaports in Kazakhstan: Aktau, Bautino and Kuryk.

Nowadays Aktau International Commercial Sea Port is a modern multi-purpose terminal that allows the transportation of goods from East to West, from North to South and back 12 months a year and 24 hours a day.

Bautino сargo district is a division Aktau International Commercial Sea Port, and is located in the village of Bautino (150 km from the city of Aktau), in the waters of the Bautino Bay of Tyubkaragansky Gulf.

Kuryk Port is located on the coast of the Caspian Sea, south of Aktau city. The port has direct access to the railway tracks. The ferry complex of the port is designed for transshipment of goods, including grain, petroleum products, fertilizers and chemicals.