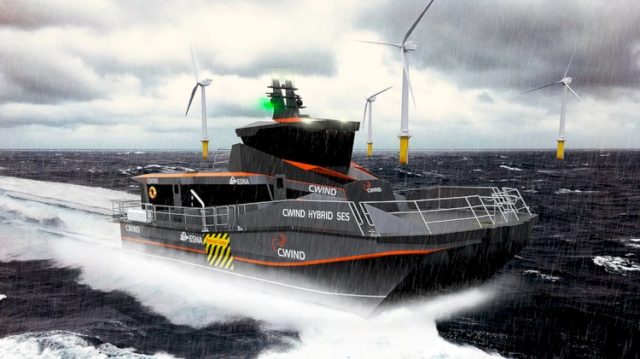 One of the UK’s leading aluminium vessel builders Wight Shipyard Co have been contracted to build the world’s first hybrid surface effect crew transfer vessel, which will service the Borssele 1 and 2 offshore windfarms located 23 kilometres off the Dutch coast.

WSC was chosen to build the vessel by CWind because of its reputation for superior build quality and track record of delivery coupled with the unique ability of working with new designs and concepts, including hybrid vessels that reduce carbon emissions.

“We have built a reputation in the fast ferry arena and commercial marine sector. But this a world first, building a hybrid SES for crew transfer. Building greener vessels has been an integral focus for some time now so we are well placed to lead this step change in Crew Transfer Vessels.”

WSC will manage the build project from its development stage right through to delivery. The vessel will be a game-changer for the industry because of its ability to handle 2m significant wave height during technician transfer in heavy seas. At the same time, it will decrease fuel consumption and CO2 emissions.

The Hybrid SES propulsion engine will deliver sprint speed and extreme bollard push from its 1,600 kW installed diesel engines, which can be battery boosted up to 1,500 kW. Significant fuel savings will be achieved through balancing engine and inefficient low engine power running hours, with battery drive modes including windfarm standby and low speed/harbour operations.  This will lead to an engine operating hour reduction of 50% during windfarm battery standby.

“We embarked on the design of this revolutionary project last year, which utilises new technology to meet industry drivers for improved performance and reductions in carbon emissions. We’re proud to be delivering a concept which is at the forefront of CTV innovation and look forward to a collaborative working partnership with Wight Shipyard Co over the coming months for the build of this vessel. WSC have been great to work with during the pre-contract stage and have embraced the new technology for this vessel. We are confident that they will deliver a high quality solution, on time.”

The Hybrid SES crew transfer vessel was developed in partnership with the operator CWind and ESNA, a ship design company based in Kristiansand, Norway, which specialises in commercially competitive vessels with surface effect technology to deliver significant carbon reductions.

Consisting of two catamaran hulls with the area between the hulls closed, by flexible reinforced rubber fingers in the bow and an inflated rubber bag in the stern. Centrifugal fans blow air into this enclosed space, providing an air cushion that supports up to 80% of the vessel weight. The remaining 20% is supported by hull buoyancy. This allows for higher vessel speed because the hull resistance is significantly decreased. It also reduces motion owing to less wave contact. In addition, the air cushion acts as a large shock absorber, improving the seakeeping and reducing seasickness.

The overall design and build, with 24 passenger capacity, will pay particular attention to technician and crew health, safety and comfort, thus delivering the workforce in the best possible work-ready condition.

“The vessel design will accommodate further developments in hybrid propulsion and battery technology, ensuring it has the capability of being developed into a totally carbon-free solution in the future. Wight Shipyard Co was the obvious partner for the build because of its solid reputation for both quality timely builds and experience bringing a new concept hybrid vessel to market”.

CWind’s long-term charter contract agreement with Ørsted, which operates the Borssele 1 and 2 offshore windfarms, will start in mid-2020. The agreement will cover an initial three-year firm charter with options available for a further two years.

The new CWind Hybrid SES will enable Ørsted to not only deliver and service windfarms efficiently through reduced transit times, but support Ørsted’s green energy ambition. The Hybrid SES crew transfer vessel will operate from the Dutch port of Vlissingen to Borssele 1 and 2, located 23km from the Dutch coast in the North Sea.

WSC has focused on designing and building lighter weight fast ferries with the subsequent benefit of lower fuel burn – with previous builds including Red Funnel’s Redjet 6 and 7, three vessels for MBNA Thames Clippers and the first two passenger ferries built outside of the United States for Mexican operator Ultramar.

Also using its build expertise to spearhead newbuild hybrid vessels setting new industry standards in the sector. Earlier in 2019, it unveiled a step change in patrol craft with the new hybrid vessel designed by Chartwell Marine which was showcased on the quayside at Seawork International.