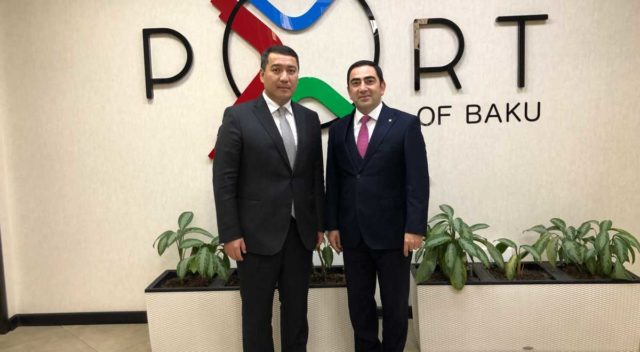 On the eve of the study visit to the Baku International Sea Trade Port (Alat), on November 14, 2019, the Ambassador of Kazakhstan Serzhan Abdykarimov paid a courtesy visit to the Director General of the Baku port Taleh Ziyadov.

During the meeting, the parties discussed the prospects of cooperation between the two countries in the transit and transport sector, including within the framework of the Trans-Caspian International Transport Route (TITR), examined the issue of equalizing the fees collected from dry cargo (feeder) vessels of Kazakhstan and Azerbaijan in the seaports of Alat, Aktau and Kuryk, as well as exchanged views on promising projects in the field of digitalization of international cargo transportation.

The Director General told the Ambassador about the concept of further modernization of the Baku port and the preparations for launching a free economic zone in the port.