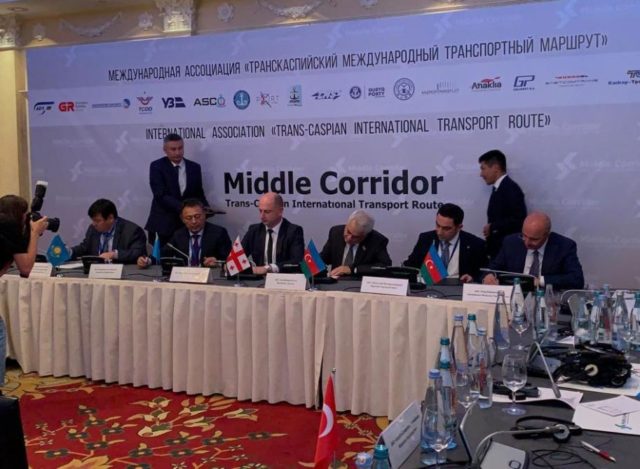 Azerbaijan is increasingly becoming major transit hub in the South Caucasus region. Along with delivering oil and gas resources to European markets, the country is also participating in large-scale transportations projects.

In a bid to strengthen the country’s transit role in international transportation, as well as to stimulate revenues from it, Azerbaijan Caspian Shipping Company (ASCO) has signed an agreement with Georgian GR Logistics & Terminals and the Romanian Grampet Group on the organization of feeder cargo transportation between the ports of Batumi (Georgia) and Constanta (Romania). The contract envisages the increase in container transportation through the territory of Azerbaijan.

The agreement was signed during the general meeting of the Trans-Caspian International Transport Corridor (TITR) International Association, an association of legal entities, in Tbilisi, on October 22. Azerbaijan Caspian Shipping Company’s subsidiary company ACSC, signed the contract on behalf of ASCO.

The route provides for the transit of goods in the direction of Europe-China-Europe and Europe-Central Asia-Europe. The delivery time of goods are expected to be reduced due to the new container route following the indicated directions.

This, in turn, will increase the attractiveness of the TITR running through the Black Sea and increase the volume of container transit cargo along the territory of Azerbaijan.

As part of the meeting, it was also decided to join the Baku International Trade Port of Hovsan and the Ukrainian TIS Container Terminal in TITR.

In addition, memorandums of understanding were signed between the ports of Baku and Aktau, as well as Baku Port and Kuryk Port on a single online sale of tickets.

The reduction of tariffs for coal transportation from Kazakhstan via this route was discussed and tariffs for 2020 were initially reviewed.

The presentation was held on Kazmortransflot’s activities on container shipments on Aktau-Baku feeder line for the past six months, and the agreement was reached to extend the contract. At the same time, the use of feeder ships of the Azerbaijani Caspian Shipping Company through this route was discussed.

Representatives of railway departments from Azerbaijan, Kazakhstan, Ukraine, Poland, Turkey and Romania, as well as more than 60 representatives of ports and logistics companies attended the meeting.

TITR extends from the Chinese-Kazakh border to the European countries, passing through Kazakhstan, the Caspian Sea, Azerbaijan and Georgia. The corridor has defined a single transit route along the entire route, with the principle of “single window” and container trains are successfully transported through the route within this project.

TITR was established in February 2014 with the participation of relevant agencies involved in cargo transportation of Azerbaijan, Kazakhstan and Georgia. Then, Ukraine, Romania and Poland have joined the association.

One of the most important achievements in improving the competitiveness of TITR is the commissioning of the Baku-Tbilisi-Kars (BTK) railway. It creates conditions for the growth of freight traffic between Europe and Asia, contributing to the development of cooperation and trade not only between Azerbaijan, Georgia and Turkey, but throughout the whole region of Eurasia.

The Nomad Express train, which runs along the TITR, transports cargo from China to Europe on average for 10-12 days, that is one of the main advantages of the route.