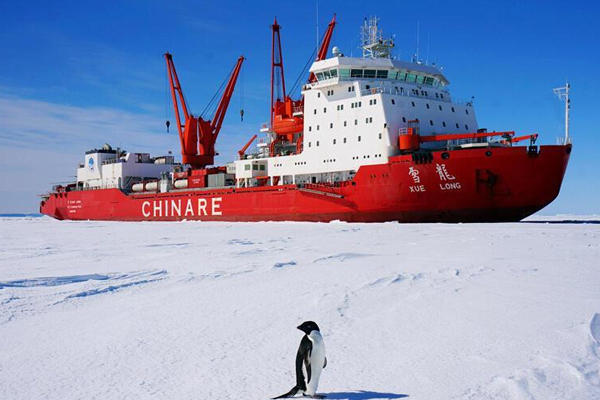 China’s first domestically made polar icebreaker Xuelong 2, or Snow Dragon 2, will start its maiden voyage to the Antarctic from the southern Chinese city of Shenzhen Tuesday, reports Trend citing to Xinhuanet.com.

Xuelong 2 will set sail on the country’s 36th Antarctic expedition, which will have a 413-member team aiming to grasp the influence of Antarctic changes on the world, improve China’s ability to cope with climate change and increase participation in Antarctic global governance, said Qin Weijia, director of the Chinese Arctic and Antarctic Administration, at a press conference held in Shenzhen, south China’s Guangdong Province.

Another icebreaker named Xuelong will also join the expedition, making it the first time that two polar icebreakers work together on China’s Antarctic expedition.

Xuelong 2 will sail to the Zhongshan Station before conducting research in the Cosmonauts Sea and China’s Great Wall Station. It is expected to return in late March 2020.

The icebreaker Xuelong will set sail from Shanghai on Oct. 22 to the Zhongshan Station and then conduct a series of surveys and engineering projects in the Ross Sea and Amundsen Sea. It is expected to return in mid-April 2020.

The expedition will conduct multidisciplinary observations on the sea, atmosphere, ice shelf and biology. It will also conduct preliminary construction work of China’s fifth research station on Inexpressible Island.

Compared with its predecessor Xuelong, Xuelong 2 is expected to perform better in icebreaking and expedition.

It has two-direction icebreaking capabilities with both its bow and stern able to continuously break ice as thick as 1.5 meters at a speed of 2-3 knots, according to its captain Zhao Yanping.

Equipped with a number of sensors, Xuelong 2 is able to acquire and deal with data from the whole vessel, which means a more intelligent expedition.

The two vessels are expected to arrive at the Zhongshan Station around Nov. 25, where Xuelong 2 will carry out its icebreaking tasks, while Xuelong transport goods and personnel to the station.

Once the ice breaker encounters particularly dense ice floes at the South Pole, a helicopter equipped on the vessel called Xueying 301 can help detect the ice from the air, according to Sun Bo, vice director of the Polar Research Institute of China.

Xuelong 2 is able to conduct scientific research in areas with high ice density and collect data on hydrology, chemistry as well as ecology. It is equipped with a 22-meter columnar sampling device for sea sediment survey.

The 90 passengers on Xuelong 2, consisting of vessel staff, expedition members and a doctor, will spend five months together. There are a dining hall, a gym, a library and a barber’s on the vessel to meet their daily needs.

The 36th Antarctic expedition will help enhance China’s environmental observation capability and expand its observation network in the area.

In addition to routine scientific investigations, the expedition team will also improve the environment around the research stations and pay more attention to the ecological protection, Xu said.