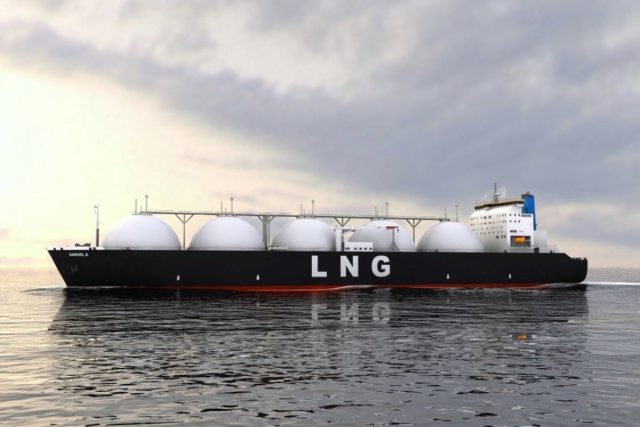 Currently, the demand for LNG is increasing in the global market. As the demand increases, the US companies build new establishments to meet the demand, LNG import and regasification terminals turn into LNG export terminals.

“The total export capacity of LNG in the United States (producing and under construction) reaches 92.4 million tonnes. At least 100 million tons annually and potentially up to 250 million tons of capacity is required to satisfy the growing demand globally,” said Renee Pirrong, Manager at Houston-based Tellurian Inc. for Research and Analytics.

She spoke about ‘shale revolution’ and noted that the US has emerged as the largest producer of oil and gas in the world and that is entirely due to the shale revolution, which started before around 2010 as private exploration and production companies started experimenting with different ways to extract resources from shale. The US in 2018 had the largest year-on-year growth of oil production in the world. It was the largest not only in the United States but also globally. And that was entirely driven from the shale revolution. What that has done, it has a corresponding downward impact on global oil prices.”

“A ‘synergistic relationship’ where the US needs global markets as an outlet for its excess production, and global markets need the US for gas supply,” she said.

She noted that the main markets in LNG growth are China, India and Europe: “China is pursing environmental policy to reduce the carbon emissions. India’s economy is growing. Europe wants to get energy from an alternative source. Interesting events happened in Europe last year. Some US LNG cargos entered the markets and many of them found places in European markets. Europe has developed gas pipelines, infrastructure, import terminals and natural gas storage facilities. Europe was balanced in global LNG market.”

Pirrong also noted that the interest to LNG in Europe is due to the ban on coal and decline in liquid gas price.

The highest demand for LNG in Europe is in Germany.

Moreover, she noted that new markets also need LNG and this demand keeps US in a good position on LNG export: “We’re seeing a lot of emerging markets such as Bangladesh, Pakistan, Lithuania using FSRUs as a way to provide greater optionality for fuel imports, and as a low-cost way and a fast way to do so.”

According to her, $150-$225 billion of investment is required to build 100-150 mtpa LNG and supportive pipeline infrastructure to export excess U.S. gas supply. Several LNG export terminals currently operate at the US Gulf Coast, and works are underway for construction of a few more.

Director of External Affairs at the Sempra Energy Company J. C. Thomas said that LNG is clean and reliable energy: “We know that it is an important attribute of LNG that you can really change the economic community by adding access to clean and affordable energy which is not used as a political tool, or weapon or things like that..”

Thomas noted that the strategic view of the company is to develop infrastructure and deliver cleaner, more favorable and reliable energy to the world: “Our goal is to export 45 million tonnes of clean natural gas to the world markets and become one of the largest LNG exporters in North America.” In Cameron LNG, Sempra LNG holds 50.2%, French Total, Japanese Mitsui and Mitsubishi companies hold 16.6% for each.

Cameron LNG is one of five LNG export terminals in the U.S. and first LNG production commenced in May 2019, while commercial operations started in late August. Currently, Cameron LNG features 1 liquefaction train capable of 4 million tonnes per annum. The natural gas enters this unit, is cooled up to -260F. Its volume is reduced almost 600 times and loaded to export tankers. The produced LNG are stored in 3 storage tanks.

Jamie Gray, Cameron LNG Project Director, said that natural gas enters the terminals through pipeline networks, but purchase of gas is carried out by clients.

In the first phase, two trains are expected to begin producing in 2020. Total capacity will reach 12 million tonnes.

He noted that this part of the project costs $10 billion: First LNG was produced in May 2019, during the visit of US President Donald Trump. Commercial operation began in August. So far, the LNG has been transported to Europe, Asia and South America. LNG sale is carried out by carriers.

In the phase 2, Cameron LNG has received approval from the Federal Energy Regulatory Commission to add two additional liquefaction trains with the total capacity of 8Mtpa and up to two additional full containment LNG storage tanks.  However, no final investment decision was made yet.

Sempra LNG is developing the Port Arthur LNG liquefaction with 22 million tonnes per annum, which is in Southeast Texas and has a direct access to the Gulf of Mexico, and Energia Costa Azul (ECA) in Mexico with 14.4 million tonnes. The FID on the phase 1 of the Port Arthur (11 million tonnes) is expected to be made in the first quarter of 2020,while the first LNG is planned to be produced in 2024.

Annual liquefaction capacity of the phase 2 of the project is planned to reach 11 million tonnes and two more liquefaction units are expected to be built.

Another US company, which joined the LNG boom, is Houston-based Tellurian. The company obtained permission for construction of Driftwood LNG terminal in the south of Lake Charles, west coast of the Calcasieu River on the Gulf Coast in southwestern Louisiana. The terminal, with the capacity of 27.6 million tonnes, is planned to be launched in 2023. Its investment cost is $30 billion.

Joi Lecznar, Senior Vice President for Public Affairs and Communication at Tellurian Inc., noted that the company has been cooperating with French Total company for a long time and Total has made sufficient investment. He said that a turnkey agreement (worth $15.2 billion) was signed with EPC contractor Bechtel for construction of the export terminal and whether they get guarantee on completion of the project timely and complying with the budget: “Four pipelines are offered for transportation of natural gas to LNG export terminal. We have integrated upstream, midstream and downstream, as well as trading business. We are able to either buy or product gas for the LNG terminal. We are now considering the options.”

Renee Pirrong said that Driftwood LNG has a very different business model from the other projects have done it: “Tellurian’s business model promises natural gas prices at the lift cost, or the price it takes to extract the fuel from the ground. But to be able to do that, the customer is required to be an equity investor. Essentially you’d purchase 1 million tons of LNG for an upfront cost of $500 million. So an equity cost of $500 per ton, and for that cost you are entitled to lift LNG at the facility at cost, so you’re not paying a premium every month for your long-term contract. We believe that we can produce LNG at $3 per mmBtu (million British thermal unit).”

Another company joining LNG boom is Energy Transfer, one of the US pipeline operators. The company has signed a contract with Shell to deliver the LNG to world markets. The Lake Charles project is a 50/50 venture between Energy Transfer and Shell.  The project, if sanctioned through an affirmative final investment decision, would have the annual liquefaction capacity of 16.45 million tonnes.