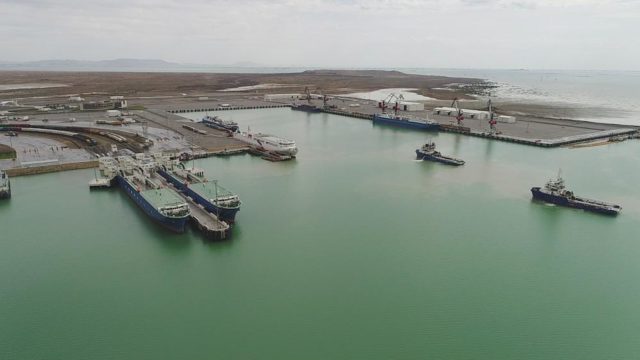 The key participants of the Trans-Caspian International Transport Route (TITR) are the national transport companies of Kazakhstan and Azerbaijan, a representative of the Ministry of Industry and Infrastructure Development of Kazakhstan told Trend in an interview.

“Azerbaijan is a key political and economic partner for us in the Caucasus region. We are optimistic about the prospects of further progressive development of bilateral relations,” the Ministry’s representative said.

An important stage of bilateral cooperation is the work of the seaports of Kuryk Kazakhstan and Alat in Azerbaijan. In December 2016, the construction of the ferry complex in the port of Kuryk was completed. It is focused on the transshipment of petroleum products, grain, chemicals, fertilizers and other goods, allowing their transshipment without unloading them from the cars.

In order to reduce the time for processing ferry cargoes between Kazakhstan and Azerbaijan ports, a new procedure for issuing transportation documents according to the “one window” principle has been introduced. As a result, the time reduced from 10-12 hours on average to 4 hours, and border authoritiesas well as customs and temporary storage warehouses work around the clock, the representative noted

Moreover, launch of the Baku-Tbilisi-Kars railway line, which provides direct transportation of passengers and cargo through the territories of Azerbaijan, Georgia and Turkey, serves to increase the transit potential of the countries in the region.

The implementation of this project, as well as the introduction of freight traffic between the countries of Europe and Asia along this line, also contributed to the increase in the volume of intermodal and container traffic in both directions.

Starting from March 1, 2017, Kazakhstan, Azerbaijan and Georgia agreed on the conditions for the carriage of goods by rail and ferries on the Alyat-Aktau-Alyat and Alyat-Kuryk-Alyat routes.

The representative of the Ministry said that a container train from the Kazakh-Chinese logistics terminal in the port of Lianyungang in China was launched on November 28, 2018. The container train will proceed via TITR through Kazakhstan, Azerbaijan, Georgia and Turkey to its final destination in Istanbul.

According to the Ministry, the current plans imply that the transportation to this destination will be carried out on a regular basis; container shipments will be sent from the port of Lianyungang every month. The frequency of shipments will be increased In the future.