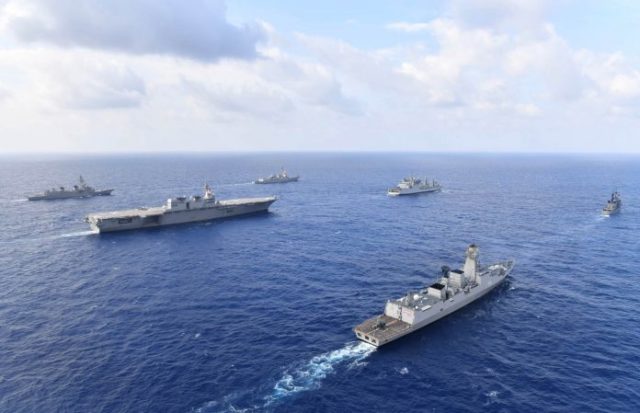 For the first time, naval ships from the Philippines, Japan, India and the United States conducted a joint exercise in the South China Sea.

The ships sailed from Busan, South Korea, to Singapore from May 2–8 as part of an ongoing international commitment to protect trade routes and ensure economic security.

The U.S. said that events like this promote a free and open Indo-Pacific.

“Professional engagements with our allies, partners and friends in the region are opportunities to build upon our existing strong relationships, as well as learn from each other,” said Commander Andrew J. Klug, commanding officer of the USS William P. Lawrence.

“In addition to building mutual understanding and trust, it also served as a way to enhance peace and stability in the Indo-Pacific region,” Japanese Rear Admiral Hiroshi Egawa said.

#IndianNavy ships Kolkata & Shakti carry out Group Sail with Naval ships of @JMSDF_PAO, Philippines & @USNavy in the South China Sea from 03 – 09 May 19. The six-day long Group Sail had participation of six combatants from the four participating countries.90911:57 AM – May 9, 2019252 people are talking about thisTwitter Ads info and privacy

“Our bond of friendship with our regional partners is as strong as our commitment to maintain peace and stability in the region,” said Captain Jerry Y. Garrido Jr. of the Philippines ship Andres Bonifacio.