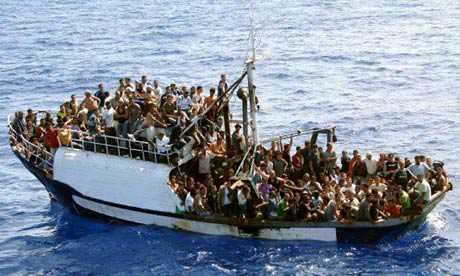 “A ship under the German flag, a German NGO, a German shipowner, a captain from Hamburg. He conducted an operation in Libyan waters and asked for a safe port. Well, let him go to Hamburg,” Salvini wrote on Facebook.

The ship rescued 64 migrants, including women and children, off the coast of Libya after receiving a distress call. Another 50 people are considered missing, the organization said. After the announcement of the rescue of migrants, the NGO called on the authorities of Italy and Malta to open their ports for them.

In late January, a ship of another German humanitarian organization, Sea-Watch, spent about two weeks at sea awaiting a decision by the Italian authorities. Then, almost 50 migrants from the ship were allowed to disembark in Italy after seven European countries, including Italy, agreed to receive them.

Similar incidents occurred in August with Italian coast guard ship Diciotti, which boarded 177 migrants. Each of these cases became a matter of political debate and international investigation. For example, the Lifeline ship of the eponymous German NGO, carrying over 230 migrants, was able to dock in Malta. The Aquarius vessel with 600 migrants was accepted by Spain after several weeks of scandals.

Ports of Italy remain closed to ships with migrants since last summer.

Last weekend, the Italian Interior Ministry reported a 92-percent drop in the number of migrants arriving in Italy by sea. In January-March, just 571 migrants arrived in the country, down from almost 6,300 migrants in the same period last year.