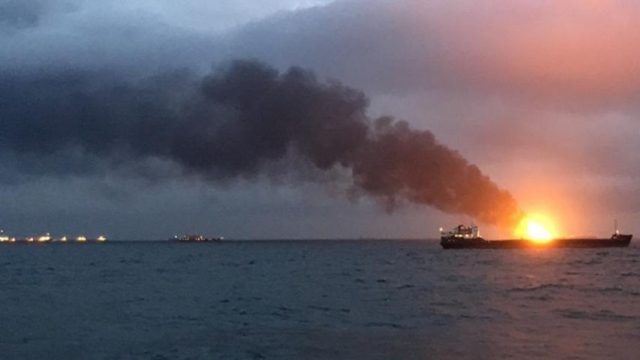 Two vessels flying the flag of Tanzania are on fire in the Kerch Strait. An explosion probably occurred onboard one of them, a spokesman for Russia’s Federal Agency of Sea and River Transport (Rosmorrechflot) told, Trend reports citing TASS.

According to the spokesman, as a result of the incident nine people died, 14 sailors have been rescued.

“Fourteen people have been rescued. Nine bodies have been retrieved from water,” he said.

According to the spokesman, one of the vessels, the Candy, has a crew of 17, including nine Turkish citizens and eight Indian nationals. The other one, the Maestro, has a crew of 14 (seven Turkish and seven Indian citizens).

“According to preliminary information, an explosion occurred onboard of the vessels. Later on, fire spread to the other ship. A rescue boat is on its way to the scene,” he said, adding that one of the vessels is an LNG carrier.

A spokesman for the Azov-Black Sea maritime rescue service told TASS a rescue operation in underway.

According to Rosmorrechflot, the accident took place when fuel was pumped from one vessel to the other.