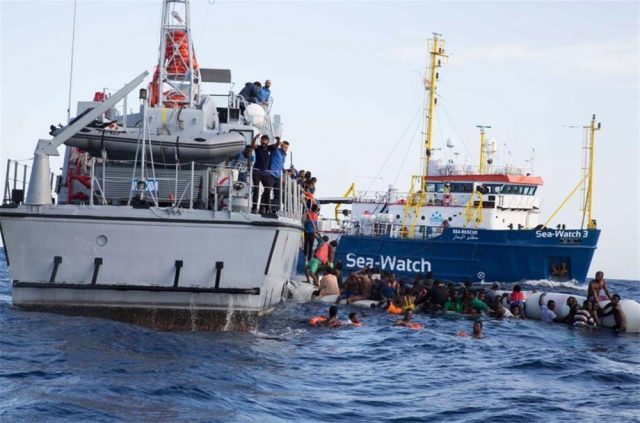 Malta without overlooking a harbor. “Overall, the situation on board is now very tense,” said Ruben Neugebauer, spokesman for the organization Sea-Watch.

The Federal Government is ready to accept the migrants rescued by German aid organizations in the Mediterranean, but within the framework of a “broad European distribution solution”. That was said by a spokesman for the Federal Ministry of the Interior in Berlin on Saturday. These are the refugees rescued from distress by two ships of the aid organizations Sea-Watch and Sea-Eye, who are currently persevering off the coast of Malta.

As in similar cases, the Federal Government advocated a rapid solution “within the framework of common European responsibility and solidarity”. This provides for a “balanced distribution” of those rescued from distress to various EU member states, the spokesman said. The Federal Government has agreed to make a corresponding contribution to the European Commission.

Sea-Watch had already rescued 32 people shortly before Christmas. In addition, a ship from the Sea-Eye organization with 17 migrants on board awaits permission to dock at a port.

On Friday, Italian Deputy Prime Minister Luigi Di Maio said that Italy was ready to accept children and their mothers from the ships Sea-Watch 3 and Professor Albrecht Penck of the Regensburg organization Sea-Eye. His call to Malta to let people go ashore, however, died away.

“The Government of Malta recommends that the Italian Vice Prime Minister review the facts before making such public statements,” a statement from Valletta said. Italy was to blame for the fact that the rescue ships had sought refuge in Maltese waters, as the country has not assigned them a port.

SPD Bundestag member Helge Lindh said during his visit to the “Sea-Watch 3” on Friday: “It is imperative that not at some point, but immediately, that these people get a reception, either in several European countries or immediately in Germany. “Several German cities had agreed to accept migrants from the ships”.© Content from this site must be hyperlinked when used.