The drilling of the first well (ABD-001) in the contract area of the Absheron gas condensate field in the Azerbaijani sector of the Caspian Sea will begin in March. Report informs, this was discussed at the public hearings on the Social and Environmental Impact Assessment (S&EA) of the Absheron field.

It is expected that the drilling works will be completed in March 2019. The drilling program is planned for 379 days. The well ABD-001 will be drilled by a semi-submersible drilling rig Heydar Aliyev.

Notably, “Absheron” gas-condensate field is located in the Caspian Sea, in the south-west of “Azeri-Chirag-Gunashli” oil-gas fields block, in 500 meters depth of the sea. According to SOCAR estimations, the field’s potential reserves consist of 350 billion cubic meters of gas and 45 million tons of condensate.

Notably, agreement on exploration, development and production of “Absheron” offshore block was signed in 2009. The project participants are SOCAR (50%) and Total (50%) 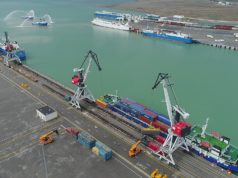 Hotline has been launched in the Port of Baku

Hotline has been launched in the Port of Baku