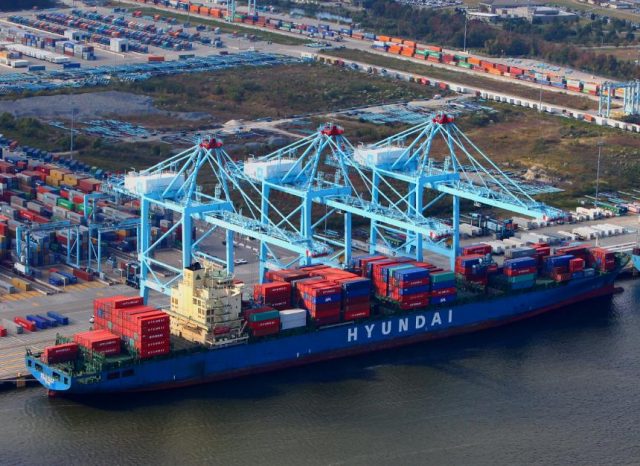 The Port of Virginia is set to benefit from an increased trade especially as bigger ships start bringing in more cargo. Namely, the port has just wrapped up one of the busiest months in its history and is now preparing to welcome its biggest ship ever, the 13,000 TEU COSCO Development.

COSCO Development is expected to be the first of many yet to come as the reshuffled ocean-carrier alliances send their sea giants to the US East Coast. As disclosed by the port, the alliances are anticipated to be one of the major contributors to the rise in cargo operations at the port which has embarked upon a major investment so as to cater for the increase.

Specifically, work is underway at Virginia International Gateway (VIG) on a USD 320 million expansion project, the first of two, that when complete, will increase the port’s overall annual container capacity by 40 percent, or 1 million container units, by 2020.

Under the project, new berthing space will be created, able to handle a larger class of container ships, that will begin crisscrossing the Atlantic Ocean before year’s end.

In addition, in July, the port will begin work on the expansion of the south stack/container yard at Norfolk International Terminals (NIT), bolstering its annual capacity by 400,000 containers.

Speaking to World Maritime News, the port’s spokesman Joseph D. Harris said that with its expansion efforts the port is targeting vessels of up to 16,000 TEUs.

“Our current, port-wide TEU capacity is 2.8 million TEUs and when the expansion is complete in 2020, we will have expanded capacity by 40 percent. The goal is to be prepared to handle the biggest vessels in the Atlantic trade. We have been servicing 10,000-plus TEU vessels with regularity and in May, the Port of Virginia will receive a 13,000-TEU vessel (COSCO Development) and we anticipate 14,000-TEU-to-16,000-TEU vessel will be calling within two years.” 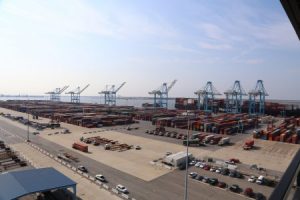 NIT South
According to Harris, the civil works part of the project is complete and the early heavy construction work is underway.

“Each phase of the project has a different completion date, but collectively they are tracking for completion of the work at both VIG and NIT in 2020,” he added.

WMN: How will the project(s) be financed?

Harris: With regard to VIG, last fall, we successfully negotiated a long-term lease (40 years) for the terminal and the new lease includes USD 320 million to build-out the facility. In summary, the lease allows to the port to repay the expansion investment in its annual rent payments over the course of the lease term. The expansion includes doubling the capacity of the rail operation, adding 13 container stacks serviced by 26 automated stacking cranes (ASCs), lengthening the berth by 650 meters and the purchase of four Suez-class cranes.

Furthermore, in an effort led by Virginia Gov. Terry McAuliffe, the Virginia General Assembly included USD 350 million in its 2016 bond package for expansion at NIT. This project will create greater density for cargo at NIT and expand annual capacity there by 400,000 containers. For this project, the terminal’s south-side container stack yard will be completely reconfigured and it will be served by 60 new rail-mounted gantry cranes.

WMN: What has the carrier consolidation meant for the port activity?

Harris: We are seeing larger vessels calling the port and these larger vessels are loading and discharging greater amounts of cargo at one time. As a result, there is significant planning required to working these vessels before they arrive. Once in port, these vessels are at berth longer and require more resources – manpower and cargo handling equipment – to effectively work the vessel.

The consolidation of carriers has changed the overall alliance landscape and we now have ocean carriers in all new alliances. We will see this trend continue as the Japanese carrier consolidation (J3 / K-Line, MOL and NYK) will soon be announced.

Based on the port’s initial projections, the newly-formed Alliance, comprised of Hapag-Lloyd, K Line, MOL, Nippon Yusen Kabushiki Kaisha (NYK Line) and Yang Ming, is bringing almost 40 percent of cargo moving over the Port of Virginia, taking over the lead from the former G6 Alliance, made up of APL, Hapag-Lloyd, Hyundai Merchant Marine, Mitsui O.S.K. Lines, NYK and Orient Overseas Container Line (OOCL).

The Alliance is followed by the Ocean Alliance, membered by COSCO Container Lines, OOCL and Evergreen Line, with a 27 percent share, 2M with 24 percent and other carriers taking 10 percent share.

We believe that our expansion is well-timed to coincide with increased trade through The Port of Virginia,” Harris said.

As informed, before the new alliances were announced, the percentage of cargo moving over the Port of Virginia via the alliances was:

WMN: How has the expansion of the Panama Canal affected the cargo inflow at the port? What do the numbers say?

Harris: Our cargo flows coming through the Panama Canal remain strong. What we are seeing in all of our trade lanes is fewer vessel calls, but more cargo being moved on larger vessels. With the Panama Canal expansion, BCOs (beneficial cargo owners) located in the Midwest have been reconsidering East Coast gateways, including POV, for Midwest imports and exports moving via rail.

One of the drivers making BCO’s look more closely at the Port of Virginia is the ability to reach the nation’s heartland via double-stack rail. The port has on-dock service by both of the East’s Class-I railroads, CSX and NS and we are expanding rail capacity at VIG as part of the larger terminal build-out.

NIT Central Rail Yard
At present we are moving 37 percent of our cargo volume by rail – placing the Port of Virginia 1st in terms of rail volume on the East coast – and our goal is to push that to 45 percent during the next few years. 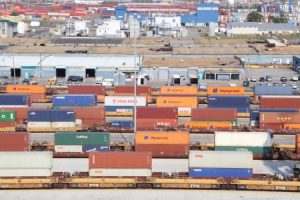 Further, there has been significant interest by many West Coast-based companies seeking to set-up an East Coast distribution center. Virginia, because of its many assets and world-class port, is drawing a lot of interest and investment. A catalyst for that interest is improving and growing ocean carrier services via the Panama Canal.

Referring to other factors influencing the expected increase in cargo load, Harris said that ocean carriers and cargo owners continue to build their confidence in the Port of Virginia “as a result of the capacity expansion that is underway and multiple other projects focused on building cargo velocity across all of our terminals.”

Carriers are also attracted by the port’s 50-foot channel depth by maxing-out cargo loads on first-in and last-out vessel calls as well as the port’s ability to reach the nation’s heartland via double-stack rail, along with short turn-times of motor carriers serving the port which average 60 minutes or less, Harris concluded.