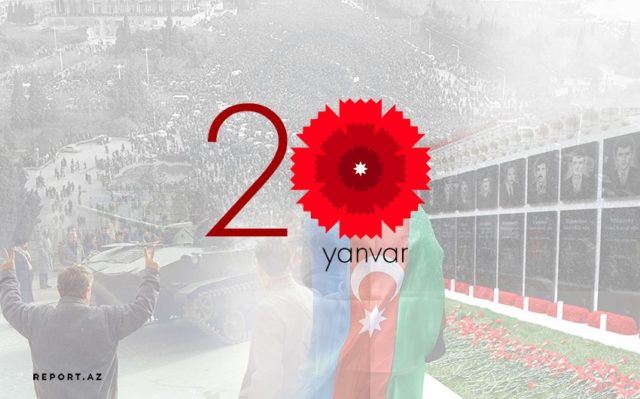 Thirty-three years have passed since the events of January 20, 1990, which are went into history as the tragedy of ‘Black January.’

The so-called Nagorno-Karabakh problem, which re-emerged in late 1987, was aimed at violating the territorial integrity of Azerbaijan, occupying its lands, and expelling hundreds of thousands of Azerbaijanis living in Armenia and Nagorno-Karabakh. This conflict between the two republics of the former Soviet Union was the next stage in the policy of ethnic cleansing and genocide against Azerbaijani people, as well as the consistent settlement of Armenians in Azerbaijan in the XIX-XX centuries.

The direct or indirect support of the USSR leadership to the territorial claims of the Armenian SSR, separatism instigated by radical Armenian nationalists and mass violence against Azerbaijanis, as well as the criminal indecision of the then leaders of Azerbaijan and steps contrary to national interests pushed the Azerbaijani people to stand up for the protection of the territorial integrity of their country. Thus, a broad-spectrum social movement emerged in Azerbaijan, and the course of the process laid the foundation for its gradual transformation into a national liberation movement.

On the night of January 19-20, 1990, under the direct orders of the General Secretary of the Central Committee of the Communist Party of the Soviet Union, Mikhail Gorbachev, troops of the Ministry of Defense, the State Security Committee, and the Ministry of Internal Affairs of the USSR entered Baku and several districts of Azerbaijan. Mass killings were carried out by firing from heavy equipment and various types of weapons. The occupation of Baku by special forces of the Soviet army and a large contingent of internal troops was accompanied by special cruelty and unprecedented brutality. Until the state of emergency was announced to the population, military personnel mercilessly killed 82 people and fatally wounded 20. After the declaration of a state of emergency, 21 people were killed in Baku within a few days. Eight more people were killed in districts and cities where the state of emergency was not declared – on January 25 in Neftchala and on January 26 in Lankaran.

Thus, 131 people were killed and 744 injured in Baku and its surrounding regions due to the illegal actions of the troops.

Among the dead were women, children, and the elderly, as well as emergency workers and militiamen. The illegal deployment of troops was also accompanied by mass arrests of civilians. During the operations, 841 people were illegally arrested in the capital Baku and other cities and districts of the republic, and 112 of them were sent to prisons in various cities of the USSR. Military personnel fired at 200 houses, 80 cars, including ambulances, and a large amount of state and private property was destroyed as a result of fires caused by incendiary bullets.

The actions of the Soviet troops showed all the signs that were condemned in the international tribunal held in 1945-1946 and went down in history as the Nuremberg trials. In total, there are 150 Martyrs of January 20 in Azerbaijan.

The next day after the massacre, on January 21, the great son of the Azerbaijani people, Heydar Aliyev, headed to the Permanent Mission of Azerbaijan in Moscow and issued a statement strongly condemning the USSR government and the incompetent leadership of Azerbaijan, which committed a massacre in Baku. The world’s progressive forces also strongly condemned this terrible and ruthless terror inflicted on the Azerbaijani people.

Only a few years later, at the initiative of national leader Heydar Aliyev, a political and legal assessment was given to the tragedy in Azerbaijan, which was not thoroughly investigated in time and did not receive an adequate assessment. The Decree of the President of the Republic of Azerbaijan “On holding the 4th anniversary of the January 20 tragedy” dated January 5, 1994, recommended the Milli Majlis of the Republic of Azerbaijan to consider the issue of holding a special session on the Bloody January events. The decision of the Milli Majlis on March 29, 1994, specifically identified the perpetrators of the January 20 tragedy and assessed this bloody action as military aggression and crime committed by the totalitarian communist regime to stifle the national liberation movement in Azerbaijan and break the trust and will of the people.

On January 20, 1990, the people of Azerbaijan gave many martyrs for their freedom and independence. However, its will was not broken, and its national spirit was not shaken. The sons of the Fatherland, who sacrificed their lives to protect national interests during the massacre and rose to the peak of martyrdom, wrote a new bright page in the heroic annals of the Azerbaijani people with their matchless sacrifices.

With the historic victory achieved in the Patriotic War of 2020 under the leadership of President, Victorious Supreme Commander-in-Chief Ilham Aliyev, the troubled souls of the martyrs of January 20 found peace. Today, the national purpose of the Azerbaijani people implies a return to their historical lands. Great construction works are going on in Karabakh and Eastern Zangezur, the Great Return has already started with the village of Aghali in Zangilan, and the return process will be accelerated this year.

Azerbaijani refugees will also return to their ancestral homeland in Armenia. Examples of national resistance in the events of January 20, intransigence with 30 years of occupation, and the Historic victory achieved in the Patriotic War of 2020, bringing Armenia to its knees, strengthen these hopes.

President Ilham Aliyev has already defined the return to Western Azerbaijan as a new priority.

Every year, January 20 is commemorated in Azerbaijan as the National Day of Mourning.