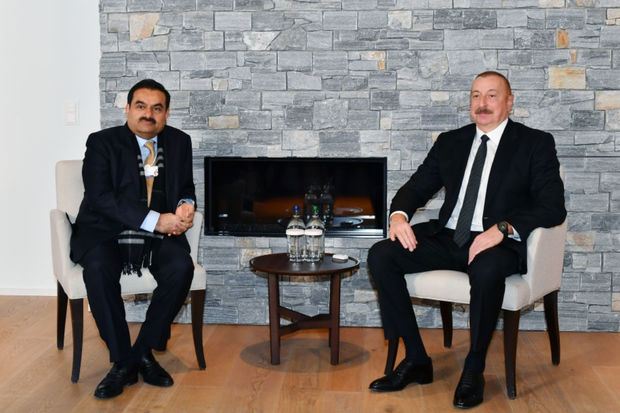 President of the Republic of Azerbaijan Ilham Aliyev has met with Founder and Chairman of the Adani Group Gautam Adani in Davos, APA reports.

During the meeting, the sides emphasized that Azerbaijan is the initiator of the East-West and North-South transport corridors and one of the key transport-logistics hubs, and discussed prospects for cooperation in this regard.

The sides also noted the special importance of the Middle Corridor passing through the territory of Azerbaijan within the context of the East-West transport corridor.

Gautam Adani said that the company has extensive experience in the fields of port management, transport and transportation in India and different regions of the world, and has made direct investments in these fields in several countries across the world.

During the conversation, the sides exchanged views on Azerbaijan’s attractiveness for foreign direct investments, the development of the country`s economy, and the prospects for cooperation with Adani Group in petrochemical, mining, metallurgical industry and other areas of mutual interest.

The sides agreed to organize reciprocal visits of delegations and hold broad discussions on future cooperation.

President of the Republic of Azerbaijan Ilham Aliyev has met with Founder and Chairman of the Adani Group Gautam Adani in Davos, APA reports.