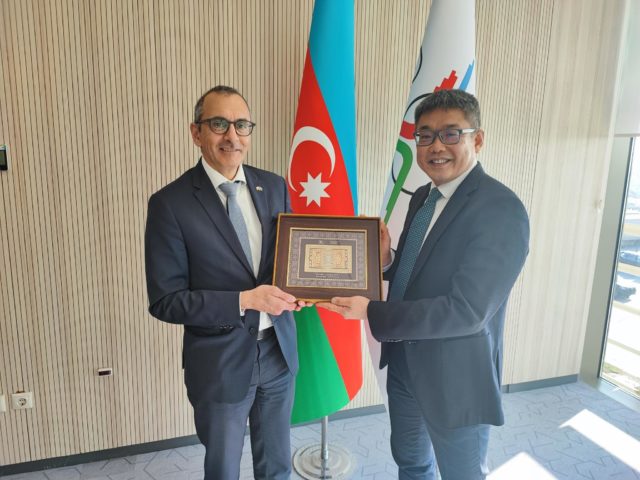 The delegation of Switzerland consisting of diplomatic officials, government representatives as well as business heads representing 20 leading Swiss companies paid a visit to the Port of Baku.

According to Report, the Swiss delegation was led by Mr. Erwin Bollinger, Co-Chair of the Joint Commission on Trade and Economic Cooperation between Switzerland and Azerbaijan, also accompanied by Ms. Muriel Peneveyre, Ambassador of Switzerland to the Republic of Azerbaijan and to Turkmenistan.

The guests were welcomed by Mr. Eugene Seah, COO of Port of Baku, and the port operations team. During the meeting, strategic views on increasing the trade opportunities between the Swiss companies and Port of Baku were discussed. The delegation also stated that the role of the Middle Corridor has been become significantly important for global connectivity and economic integration, and role of the Port of Baku along the trade corridors in the region for connecting global supply chain and businesses is crucial.

It should be noted that the volume of transit cargo that transshipped from Asia to Switzerland has grown up-to 143% in 2022 in compression with 11 months of 2021. If overall cargo transshipment to Switzerland via the Port of Baku was 58 656 tons in 11 months of 2021, in the analogue period of 2022 it has been recoded 142 309 tons. The throughput cargo are mainly mineral fuels, lubricants and related products, as well as industrial, food and chemical goods, raw materials, machinery and transport equipment, etc.