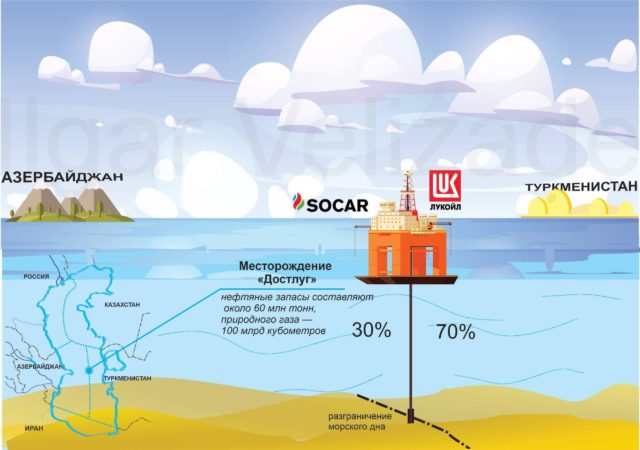 Ashgabat and Baku are preparing an intergovernmental agreement on the joint development of the Dostluk (Friendship) oil and gas field in the Caspian, the Turkmen Foreign Ministry said on Tuesday.

According to the report, Deputy Prime Minister, Foreign Minister of Turkmenistan Rashid Meredov held talks in Baku with Azerbaijani President Ilham Aliyev and Minister of Economy of the Republic Mikayil Jabbarov.

Meredov said at a meeting with the head of the Ministry of Economy that on December 14, a trilateral summit of the heads of state of Turkmenistan, Azerbaijan and Turkey will be held in the Avaza National Tourist Zone on the Turkmen coast of the Caspian Sea. According to him, the day before, on December 13, three parallel ministerial meetings will be held: foreign ministers, transport ministers and energy ministers of the three countries.

In this regard, the Turkmen Foreign Ministry notes that “in January 2021, Turkmenistan and Azerbaijan signed a memorandum of understanding on joint exploration, development and development of the Dostluk hydrocarbon field in the Caspian Sea.” “In the development of this document, bilateral consultations at the level of working groups on the preparation of an appropriate intergovernmental agreement continue,” the Foreign Ministry of Turkmenistan adds.

A number of experts do not rule out that an intergovernmental agreement on the joint Turkmen-Azerbaijani development of the Dostluk oil and gas field in the Caspian Sea may be signed at the upcoming trilateral summit on December 14.

“Dostluk” is the new name of the deposit, which is known as “Serdar” in Turkmenistan, and “Kyapaz” in Azerbaijan. The dispute over this field, located on the Turkmen-Azerbaijani border in the Caspian Sea, has lasted since the collapse of the USSR and ended with an agreement on joint development.