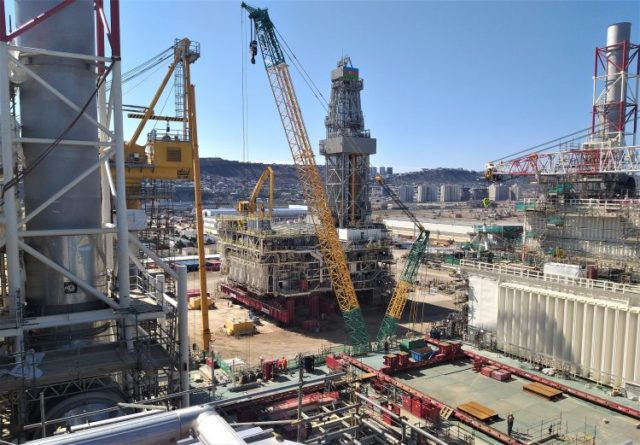 In the first half of 2023, BP plans to send the support block and topsides of a new production platform to the sea as part of the Central East Azeri (CEA) project, Neil Phillips, general manager of the CEA project, said.

“According to our current plans, in the first quarter of 2023, the support block of the Central East Azeri platform will be sent to the sea,  and in May-June – the topsides,” Phillips said at a presentation for journalists.

According to him, the construction of the support block and piles of the CEA production platform has already completed.

“The support block is ready, and its launch will be possible in the first quarter of 2023 after the completion of modification work on the STB-1 barge,” Phillips said. He noted that the height of the support block will be 153 meters, the total weight of the piles will be 9,000 tons.

The construction of the topsides of the platform has been completed by 95%, he said.

In addition, the construction of subsea pipelines to deliver oil and gas from the CEA platform to shore within the frameworks of the project has completed.  It remains to complete the connection of the 30-inch pipeline to the Central Azeri platform, as well as to completely clean the oil pipelines from paraffins and oil and begin diving operations.

Phillips also said that the total cost of the CEA project is about $6 billion, of which about $3.2 billion is construction costs, the rest is development costs, including drilling new wells.

The goal of the project is to achieve peak daily production of up to 100,000 barrels of oil and 350,000 cubic feet of gas by drilling additional wells and installing additional offshore facilities. On April 19, 2019, the shareholders of the ACG block development project signed the final investment decision on the ACE project in Baku. The project provides for the construction at a depth of 137 meters of a new production and drilling platform with a residential block between the platforms “Central Azeri” and “East Azeri”.