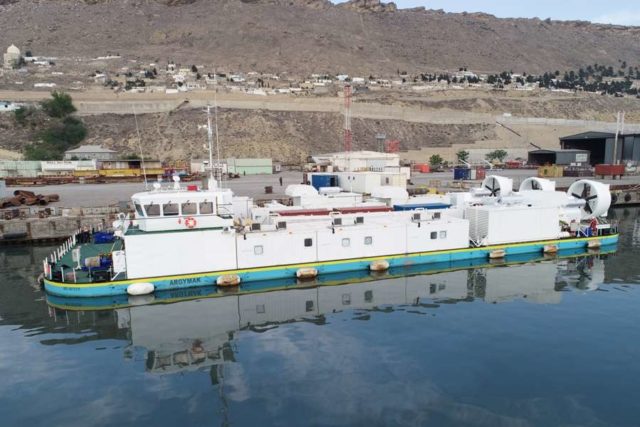 The project owner and customer of the barge named ACB Argymak is Caspian Mainport Aktau LLP”/ CMI Offshore Group. Although the construction work of the watercraft had begun at the Glasgow Shipyard in Scotland in 2019, all construction works were interrupted and suspended at the initial stage due to the insolvency of the company.

Later on, negotiations commenced between Caspian Mainport Aktau LLP / CMI Offshore Group and Azerbaijan Caspian Shipping (ASCO) for the implementation of the project. As a result of negotiations, the hull of the barge was dismantled and divided into two sections in Glasgow and transported to Azerbaijan by a dry cargo vessel.

The construction of the barge in Azerbaijan commenced at the dock of Zykh Ship Repair and Construction Yard owned by ASCO.  Along with the participation of external specialists, human and technical resources from  ”Zigh” Ship Repair and Construction Yard and “Khazar” LLC have been involved in the construction process. The construction of the barge was completed shortly. Trials of the ACB Argymak have now been accomplished successfully. The barge received a classification certificate from the Italian classification society “RINA Services S.p.A”. Currently, other necessary documentation is being carried out. Upon completion of the floating process, the facility will be sent to Kazakhstan. The barge will be operated at the Kashagan field.

The unique project is 56 meters long and 24 meters wide. The maximum speed of the barge with a carrying capacity of 150 tons is equal to 6 knots. The ACB Argymak will be operated by a crew consisting of 6 members.

Two pieces of water and two pieces of air propellers were installed on the self-propelled cargo-carrying barge which is designed for the operation in relatively shallow waters. This makes it possible to exploit the barge even in iced waters.

It is worth noting that the construction of the world’s first self-propelled cargo-carrying barge was a great experience for ASCO. It is intended to implement in the future similar new projects based on such experience.