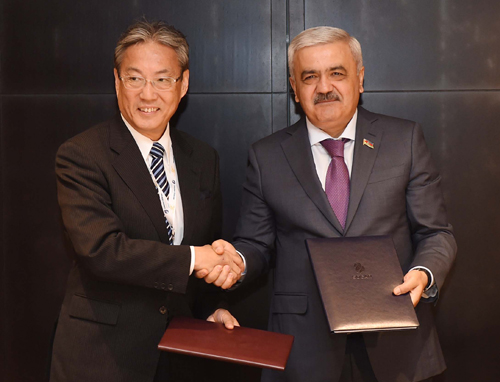 The State Oil Company of Azerbaijan (SOCAR) has signed a contract with the Japanese company JOGMEC on conducting 2D seismic surveys at the Utalgi block in the Shamakhi-Gobustan oil and gas region, Report informs referring to SOCAR.

According to the contract, 2D seismic surveys with a length of 628 linear kilometers will be carried out at the Utalgi block. First, the specialists will prepare an environmental assessment document. Exploration work is scheduled to begin in April this year and be completed in August-September. 5,100m and 9,130m wells will be drilled at the site for microseismic logging and cuttings sampling.

The forthcoming work is aimed at recording new and better data in areas with a low level of seismic data in the Utalgi block. The current contract has been signed in accordance with the Joint Research Agreement on Exploration Operations in the Utalgi Exploration Block between SOCAR and the Oil and Gas and Metallurgical Corporation ( JOGMEC) of the Ministry of Economy, Trade and Industry of Japan, concluded earlier on October 28, 2019, and is part of an extensive cooperation project between the parties. The agreement on joint research was signed by SOCAR President Rovnag Abdullayev and JOGMEC President Tetsuhiro Hosono.

The Japan National Oil, Gas and Metal Corporation (JOGMEC) was established in February 2004 from the merger of the Japan National Petroleum Corporation (JNOC) and the Mining Agency of Japan (MMAJ). JOGMEC provides technical and financial support to the oil and gas activities of ITOCHU, İNPEX, and other companies abroad.