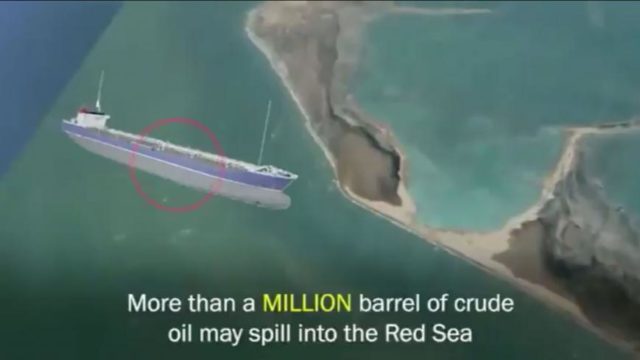 United Nations officials on Thursday called for access to the long-abandoned fuel tanker off Yemen’s coast amid growing fears of a catastrophic oil spill.

Political and logistical gridlocks in assessing the risk of an oil spill or explosion in the Red Sea are increasing the likelihood of a new humanitarian and environmental crisis in Yemen and beyond, the Security Council heard Thursday from high-level officials reporting on the tanker.

Thursday’s meeting, requested by Britain, came after Houthi rebels said an agreement to allow a UN mission to inspect the tanker had “reached a dead end.”

The 45-year-old fuel vessel FSO Safer has 1.1 million barrels of crude on board and has been abandoned near Yemen’s western port of Hodeidah since 2015.

In her briefing to the 15-member Council, Inger Andersen, undersecretary-general and executive director of the United Nations Environment Programme, expressed regret about the lack of progress over the past year in assessing the risk of a massive oil leak or explosion from the Safer.

Noting the relevance of the Red Sea’s biodiversity, she said millions of people could be exposed to harmful pollution if an explosion were to occur onboard, with severe health impacts for vulnerable populations.

Additionally, an oil spill would have negative effects on the lives of people already going through the worst humanitarian crisis in the world, she stressed.

Andersen assured the council that the UN system is working to support readiness, contingency and response planning in case of an oil spill, and highlighted the creation of several coordination mechanisms to that end. Through those mechanisms, relevant stakeholders – including the Regional Organization for the Conservation of the Red Sea and Gulf of Aden, Yemeni authorities and International Maritime Organization – have developed regional and national contingency plans, as well as contracted a private company to provide updates in the event of a spill. These efforts have been paired with a series of capacity-building workshops on responses at the regional and national levels, which involve training on the use of spill-response equipment and on the use of dispersants.

She warned the council that an oil spill or explosion could severely restrict the movement of vessels through the Red Sea, disrupting one of the busiest commercial routes in the world and would pose devastating consequences for the wealth of species found in the region. “Making an assessment is critical to identify and reduce risks linked with the Safer,” she concluded, adding that lack of progress will only negatively impact neighboring Red Sea countries.

Also briefing the council was Reena Ghelani, director for operations and advocacy at the United Nations Office for the Coordination of Humanitarian Affairs, who said that, over the past two years, Undersecretary-General for Humanitarian Affairs and Emergency Relief Coordinator Mark Lowcock briefed the Council 23 times on the Safer, including in a meeting dedicated to the issue in July 2020. Progress, however, has been much slower than anyone would have wanted and there is not much to say regarding United Nations efforts to gain access to the vessel. So far, no mission has been able to deploy, mainly because Ansar Allah (Houthi) authorities, while agreeing in principle to such an operation, are reluctant to provide assurances it can proceed.

Over the last 10 days, extensive discussions have taken place to bridge gaps, without success, she said. The main sticking point is around what the United Nations would exactly do on the Safer and why the organization is unable to specify what repairs will be carried out.

However, because no technical mission has been able to access the tanker, it is not possible to determine what condition it is in or what work must be done. The expert team needs to verify what it is dealing with and what can be done, in addition to carrying out some light maintenance to minimize the risk of an oil spill and hopefully buy more time.

Recalling that Ansar Allah accepted the scope of work in November 2020, but now seem unhappy with it, she said that “everyone wants to see the problem solved.” However, for the United Nations, work must start with a comprehensive and impartial assessment of the Safer. The organization has no interest in how the problem is ultimately solved, so long as it is done safely.

She emphasized that the expert team will remain on standby so long as donor funds are available, adding that, once a green light is given, it will still require several weeks to charter vessels, gather equipment and set off from Djibouti to the Safer.

Offering a national perspective, Abdullah Ali Fadhel al-Saadi, permanent representative of Yemen to the United Nations, said nothing has been achieved to remedy the situation, declaring: “The humanitarian risks that would result from a possible disaster are increasing.”

Noting that Houthi militias had initially agreed to cooperate in efforts to assess the risks, he said they have continually undermined the process.

As a result, Yemen is on the brink of a humanitarian and environmental crisis. “We must put an end to this catastrophe,” he stressed, noting that, since 2017, Yemen has issued warnings about the dangers posed by the vessel.

Still, Houthi militias are using the issue as a bargaining chip to advance their agenda. “The Security Council must assume its responsibilities in order for United Nations technical teams to reach the tanker,” he noted, emphasizing that inaction could result in 20 billion U.S. dollars in damages, which could reach well beyond the Red Sea.

He echoed the need to conduct maintenance on the vessel and extract the oil therein, concluding that the oil should be sold to cover costs of the operation.