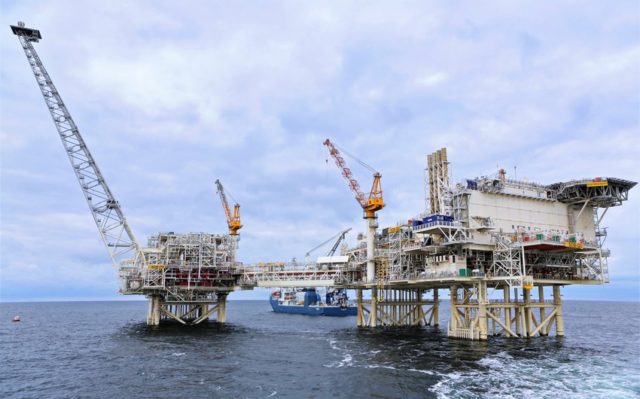 Azerbaijan – the oldest oil-producing country, has been providing energy to the world for the entire history of the oil industry.

Report informs, citing BP-Azerbaijan, that when the country gained independence in 1991, its energy provision geography significantly expanded thanks to the development of the giant Azeri-Chirag-Gunashli oil field and the Baku-Tbilisi-Ceyhan pipeline, which have been safely and reliably providing oil to global markets for over two decades.

In the 21st century, Azerbaijan’s energy industry continued to boost – this time through its natural gas resources discovered in the giant Shah Deniz field.

The Shah Deniz Production Sharing Agreement (PSA) was signed in Baku a quarter-century ago, on 4 June 1996, between SOCAR and a consortium of foreign companies. It was ratified by the Milli Majlis and became effective on 17 October the same year.

The signing of the Shah Deniz PSA and the discovery of a significant gas condensate field in the Shah Deniz prospective area fostered substantial foreign investment in Azerbaijan’s economy. The start-up of commercial deliveries of Shah Deniz gas to markets in Georgia and Turkey in 2007 via the South Caucasus Pipeline turned the country into a gas exporter, opening a new page in the history of Azerbaijan’s energy industry. Now, with the recently-launched Southern Gas Corridor (SGC), Azerbaijan’s energy resources are directly flowing into European markets for the first time, making the country a major gas supplier to Europe.

The Shah Deniz field was discovered in 1999. It lies in water depths between 50 metres and 600 metres, some 70 kilometres southeast of Baku. The field has a reservoir depth of more than 1,000 metres and is 22 km long.

Shah Deniz is one of the largest gas fields in the world, stretching out over 140 square kilometres and with approximately 1 trillion cubic metres of gas and 2 billion barrels of condensate initially in place.

The discovery and appraisal wells drilled on the Shah Deniz structure during 1997-2001 confirmed the presence of a world-class gas condensate field.

Shah Deniz is being developed in phases. In February 2003, the Shah Deniz partners sanctioned the first phase of the development of the field. It comprised both an upstream and a midstream development, including the construction of a single platform with pipelines back to the Sangachal terminal near Baku and the construction of a new gas export system – the South Caucasus Pipeline (SCP) – from Azerbaijan through Georgia to the Turkish border.

Since the start-up of commercial gas production from the field and operations of SCP in 2006, Shah Deniz has been safely and reliably providing gas to Azerbaijan, Georgia, and Turkey.

The next phase of development of Shah Deniz – Shah Deniz 2 – was sanctioned in 2013 and has proved to be one of the world’s largest and most complex gas projects. It represents the first subsea development in the Caspian Sea and the largest subsea infrastructure operated by bp worldwide. It is also a gateway to the Southern Gas Corridor that delivers natural gas from the Caspian Sea directly to European markets for the first time.

Gas is transported onshore through an 85 km pipeline to the Sangachal terminal, which underwent a major expansion to accommodate the new increased gas output. The project also expanded SCP – 428km of new pipeline in Azerbaijan and 59km in Georgia, including three new compression facilities pushing the gas across its 3,500 km long journey to Europe.

At plateau, Shah Deniz 2 will produce 16 billion cubic meters of gas per year (bcma). Together with output from the first phase of development, total production from the Shah Deniz field will be up to 26 bcma of gas and over 100,000 barrels of condensate a day.

Currently, Shah Deniz’s production capacity is over 58 million standard cubic metres of gas per day or more than 21 bcma. The project is progressing towards further ramp-up of production to its plateau level by focusing on subsea construction activities and the wells programme to start up new flanks. A total of 21 Shah Deniz 2 wells have already been drilled, and 18 wells completed out of 26. Out of them, eight wells are currently producing, and five more will come online in 2021, including the start-up of the deep-water East South Flank. The two remaining flanks – West South and East North – will start up in future years to support plateau rates.

When Shah Deniz reaches its peak production, it will provide enough new natural gas to meet the needs of every capital city along the Southern Gas Corridor – more than twice over.

With the launch of SGC, Shah Deniz commenced the delivery of significant new energy supplies to Europe, further diversifying its energy sources and providing new natural gas supplies, which will be essential in the energy transition.

The development of the Shah Deniz field bolstered the growth of local capacity and technological capability in many areas.

Shah Deniz provided significant employment opportunities for the region’s people during the construction and operations in both phases. Over 5,000 people were involved in the start-up of Shah Deniz 1. The Shah Deniz 2 development, at its peak, supported more than 30,000 jobs in Azerbaijan and Georgia and, in total, included over 180 million hours of work.

Comprehensive training and education programmes were provided to the local workforce to develop skills to support construction and subsequent operating activities.