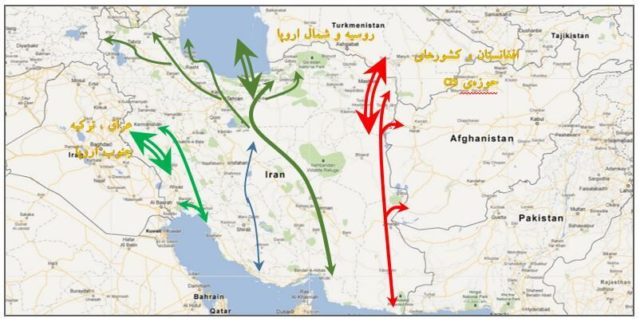 May 12, IRNA – The establishment of a free trade zone in Sistan and Baluchestan province in southeastern Iran will thrive transit of commodities and regenerate the ancient Silk Road.

The Silk Road was an intertwined network of transit routes to develop trade and business in Asia, connecting eastern, western, northern and southern parts of the continent as well as Africa and Europe. The route was the greatest business network in the world for 1,700 years until 1453 CE.

Remnants of a burnt city in Sistan and Baluchestan province prove the 5,000 year-old region was one of the passages of commercial caravans, playing key role in the economy of that time.

Nowadays, Sistan and Baluchestan and in particular the Chabahar Free Trade–Industrial Zone (CFZ) are the easiest path to oceans for the Central Asian countries and Afghanistan.

These countries can transit their commodities through land routes and via Milak border crossing near Afghanistan into Sistan free trade zone and then export the goods to all around the world.

The development of transit route between the land-locked country of Afghanistan and the Central Asia has provided Iran with the opportunity to be at the center of trade exchanges between Central Asia and other states of the globe.

Many experts are of the opinion that Iran is capable of transiting more than 10 million tons of consignments per year, earning about 30 billion dollars.

According to the lawmaker, Sistan free trade zone will play a complementary role for the Chabahar Free Trade–Industrial Zone and both of them are needed to complete the Iranian parts of the Silk Road.

Director General of Chabahar Free Trade-Industrial Zone Organization Abdul Rahim Kordi said that one of the main objectives of setting up the CFZ is that Iran gives importance to boosting trade and economic exchanges with Afghanistan.

*** Sistan Free Trade Zone
Sistan and Baluchestan province has been facing various difficulties in recent two decades, which led the eastern province to the decline of population and lack of economic growth. Water shortages have had severe impact on agriculture, animal husbandry, fishery and handicrafts; so, many of such businesses have exposed to closure.

The establishment of Sistan free trade zone is expected to have direct impact on living of people and thrive economy in the region. It would provide merchants from around the Islamic country with new opportunities for business and trade.