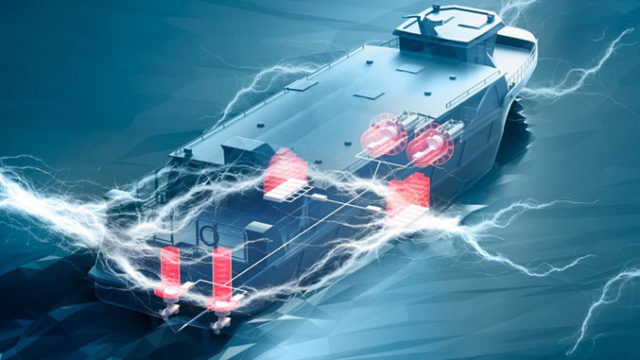 When Ørsted’s Hornsea Two offshore wind farm enters operation in 2022, two hybrid crew transfer vessels (CTVs) will be in place to transport technicians and other personnel crews across the roughly 90 kilometres to and from the area.

Earlier this summer, Danish shipbuilder and operator MHO-Co selected Danfoss Editron to deliver the drivetrain systems that will power the two hybrid crew transfer vessels (CTVs) – the first in the UK waters.

Both of the CTVs will be equipped with a Danfoss Editron serial hybrid system consisting of four propulsion motors. The systems will also include DC-DC converters for the vessels’ batteries. It is anticipated that both of the CTVs, which will be capable of operating in either fully electric or hybrid mode, will save approximately 127 tonnes of CO2 compared to traditional diesel-powered vessels.

System master
Energy Northern Perspective queried Erno Tenhunen, Danfoss Editron’s Marine Director by email to find out more about the serial hybrid system. Tenhunen leads the company’s marine business, with overall responsibility for sales, the delivery of projects and developing new systems technology at a time when electrification is a hot topic in the global marine industry.

With nearly 20 years’ experience in the marine sector, Tenhunen spent his entire career at ABB before joining Danfoss Editron in late 2019. His background includes overall profit and loss responsibility for business units. While he has a proven track record of selling and negotiating, Tenhunen’s also excels at leading and developing teams, meeting financial targets and improving results.

Innovative DC grid
ENP: Danfoss Editron’s compact and lightweight technology has overcome the challenge associated with the size of electric motors and components that were previously too large for CTVs. How much more compact is the technology now, compared to earlier systems?

The Danfoss Editron serial hybrid system for each CTV includes four propulsion motors. How do these compare to the traditional motors onboard the vessel?

“Each vessel has four propulsors, two of which are hybrid-electric that replace the direct-connected propulsion engines typically found in CTVs. This concept allows each vessel to operate in either hybrid or full-electric mode with relatively small additional investments compared to traditional diesel-powered CTVs.”

“The electric motors are also a much more efficient technology than conventional diesel engines, with losses of only a few percent. Additionally, the electric motors are much faster and accurately follow the reference RPM signal, offering better manoeuvrability and higher safety levels for operators and those on-board.”

Ørsted’s Hornsea Two offshore wind farm is located roughly 90 kilometres off the Yorkshire coast in the North Sea. During what sort of conditions will the system switch from traditional propulsion to purely electric propulsion?

“The operator will verify the way of operating the vessels. Generally, transferring from diesel to electric mode usually occurs when a vessel is either manoeuvring at low speed, staying in approximately the same position or idling in the sea. During these types of operation, the reduced propulsion power demand and hotel loads are easily managed by the batteries. Being able to operate on full-electric mode will enable significant fuel savings and prolong the lifetime of the diesel components dramatically.”

In addition to quay-side charging can the system be connected to other power sources in the future?

“The system design will have the capability for charging in any place where charging facilities are available, such as at the offshore wind farms themselves.”

The expected reduction of CO2 afforded by the Danfoss Editron system is impressive.

“This will be proven during the first few months of operation. The emissions savings will depend on how the vessels typically operate and the tasks they will perform. The majority of fuel savings will occur during manoeuvring and standby operations at the places where the crew will board and disembark the CTVs.”

Thinking of further applications of your technology, can you foresee benefits of this more compact system being applied to larger vessels operating in the offshore industry, such as offshore service vessels, to increase their efficiency and power?

Fully-electric vessels such as ferries recharge batteries during frequent stops. Do you foresee fully-electric offshore service vessels as an option for the future?

“We anticipate increased demand for fully-electric system technology in the offshore service vessels sector. Secondary drivers for electrification, such as faster system response, superior manoeuvrability, high redundancy, robustness and long-service intervals, bring overall operating costs to much lower levels. These market drivers are being considered more and more by shipowners.”

What technological advances do you anticipate for electric propulsion in the coming years?