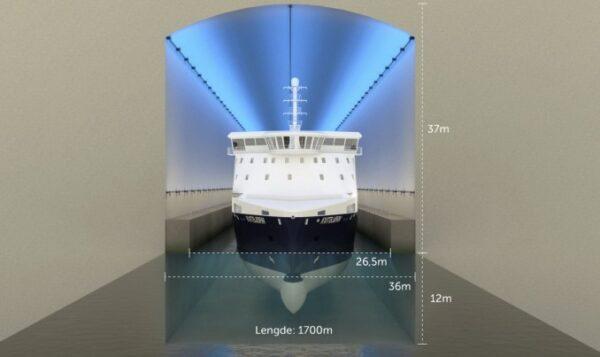 In Norway, they intend to implement a large-scale project for the construction of the world’s first marine navigable tunnel in the narrowest part of the mountainous Stad peninsula. The tunnel will connect the two fjords and help ships avoid the hardships of the sea route on this part of the Norwegian coast. The passage here is unsafe due to strong winds and powerful currents. Vessels often sit idle for a long time, waiting for favorable weather conditions.

Several years ago, the Stad Ship Tunnel project was included in the Norwegian “national transport plan” with estimated government funding of about $ 300 million. The main goal of the project is to ensure safety and reduce downtime for ships in severe weather conditions.

“The project is not yet funded by the Norwegian government,” the NCA told SeaNews. – But we hope to receive funding from the state budget already in 2021. This year preparatory work is being carried out, including land acquisition and archaeological excavations. “

permitted draft of vessels – up to 12 meters;

estimated throughput – about 100 ships per day.

The tunnel will pass under a mountain with a height of more than 300 m. In the process of construction, about 3 billion cubic meters will be transported by barges. meters of solid rocks. The entire construction will take about four years.

The Stad Peninsula is rounded by at least 20 ships per day, and with the opening of a new sea tunnel, their number may increase significantly. Traffic in the tunnel will be one-way, the direction of traffic will change every hour, and a dedicated vessel traffic center will ensure optimal traffic in the area.