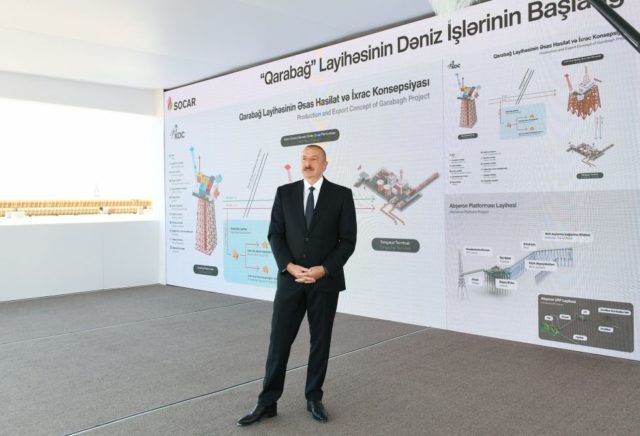 First gas and oil at Garabagh field should be produced in two years – at the end of 2022, Azerbaijani President Ilham Aliyev said in an interview to Azerbaijan Television following a ceremony at Baku Deep Water Jackets Plant named after Heydar Aliyev to send a jacket of Garabakh field offshore, Trend reports.

“The oil potential of the Garabagh field is estimated at 60 million tons but I am absolutely sure that this figure will increase at the stage of development. This is indicated by the fact that the Garabagh field is located in the vicinity of Azeri, Chirag and Gunashli fields. The distance is not very large. I remember that when a contract was being drafted for the Azeri, Chirag and Gunashli fields in 1994, foreign partners estimated the potential of these fields at 511 million tons of oil. However, life has shown – and this has now been confirmed – that the potential of the Azeri, Chirag and Gunashli fields exceeds 1 billion tons of oil. Therefore, this and other geological factors provide sufficient ground to believe that the volume of natural resources in the Garabagh field is higher. As for production, this field will annually produce at least 1.5 million tons of oil and 1.5-1.8 billion cubic meters of gas. Of course, this will be of great benefit to maintaining the stability of oil production and increasing gas production in Azerbaijan,” the head of state said.