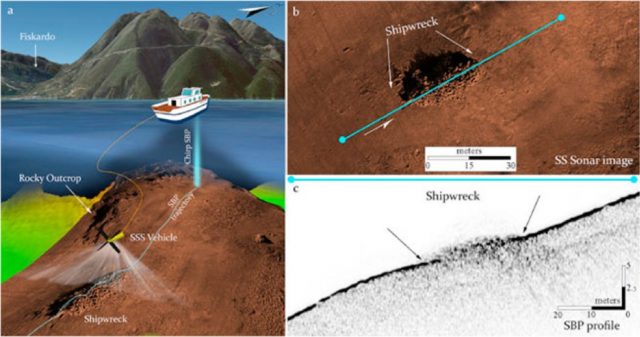 An Ancient Roman shipwreck that dates between 1 BC and AD 1 has been discovered on the Greek island of Kefalonia, with a cargo of around 6,000 well-preserved pots used for transporting wine and food, with researchers announcing it is one of the four largest ever found in the Mediterranean Sea, according to Greek City Times.

The 110-foot-long ship and its cargo, discovered near the fishing port of Fiskardo dates to the time of Jesus Christ and Greek researchers say it could reveal new information about the shipping routes taken by Roman traders across the Mediterranean, as well as giving hints about the people who lived during the beginning of the Roman Empire, along with their economy and trade.

According to a study published in the Journal of Archaeological Science, the amazing shipwreck was discovered using sonar equipment and contains thousands of amphorae, pots used for transporting food and wine.

“It’s half-buried in the sediment, so we have high expectations that if we go to an excavation in the future, we will find the part or the whole wooden hull,” announced Giorgos Ferendinos from the University of Patras, who led the study of the findings.

“This could tell archaeologists when and where the ship was made, where the material came from and how it was repaired,” added Ferendinos.

The ship’s dimensions are reported to have been roughly 110-feet long and 42 feet wide, with a cargo load almost as big — 98 feet by 39 feet.