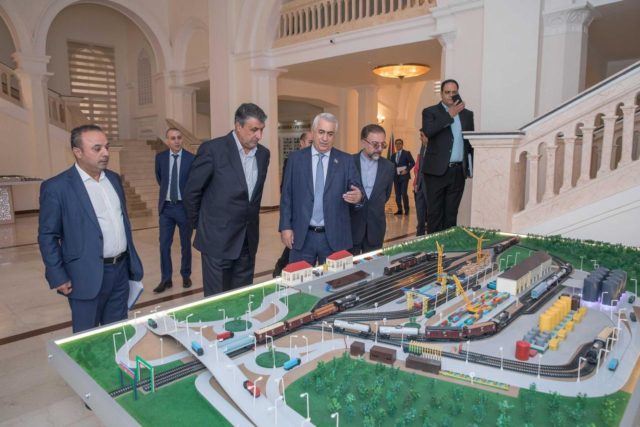 International North-South Transport Corridor (INSTC) will play a significant role in the development of not only Iran, Azerbaijan and Russia, but also other countries in the region, Chairman of Azerbaijan Railways Javid Gurbanov has said.

Gurbanov made the remarks while meeting Iranian Minister of Roads and Urban Development Mohammad Eslami on October 25. The sides discussed issues of expansion of bilateral relations.

Referring to the importance of the INSTC, Gurbanov noted that the corridor would play an important role in the regional development and will increase trade turnover between countries by implementing export-import operations on the same route.

Furthermore, the sides exchanged views on the implementation of the Rasht-Astara railway as part of INSTC.

It was noted that as part of the INSTC project, Azerbaijan has fulfilled its tasks. Around 8.3 kilometers of railway from Astara station to Iran’s border has been laid and a railway bridge over the Astara River has been built.

As of March 2018, the first phase of the Astara (Iran)-Astara (Azerbaijan) railway integration project and cargo terminal were put into operation. In addition, the foundation of the grain terminal was laid.

Azerbaijan plans to build four terminals in the Iranian city of Astara. These terminals include oil and grain terminals, a terminal for processing containers and a general-purpose terminal.

A cargo terminal was built in Iran’s Astara with Azerbaijan’s support in the first quarter of 2019. The Azerbaijani side took the terminal for a 25-year lease. The capacity of the terminal, built as part of the INSTC, is 2 million tons annually, and it is planned to be increased to five million tons in the future.

The railway line Rasht-Astara (Iran) -Astara (Azerbaijan) will be built and commissioned soon. All this will strengthen the transport-transit and economic-trade potential of Azerbaijan and Iran.

Eslami noted that one of the key tasks is to strengthen the functioning of transport corridors. In this regard, he stressed the importance of the INSTC.

INSTC envisages connecting India with the Middle East and the Caucasus, Central Asia and Europe. The project aims to increase the efficiency of transport communications in the organization of freight and passenger transportation, to assist in increasing the volume of international transportations.

As part of INSTC, Astara-Rasht-Qazvin railway project envisages the construction of a new railway line in Iran, which will connect Astara, Azerbaijan to the Iranian cities of Astara, Rasht and Qazvin as well as the reconstruction of an existing railway in Azerbaijan.

Recently, Azerbaijan, Russia and Iran have agreed to set up a working group to eliminate infrastructure restrictions and remove administrative barriers in the transportation of people and goods along the western route of the INSTC.