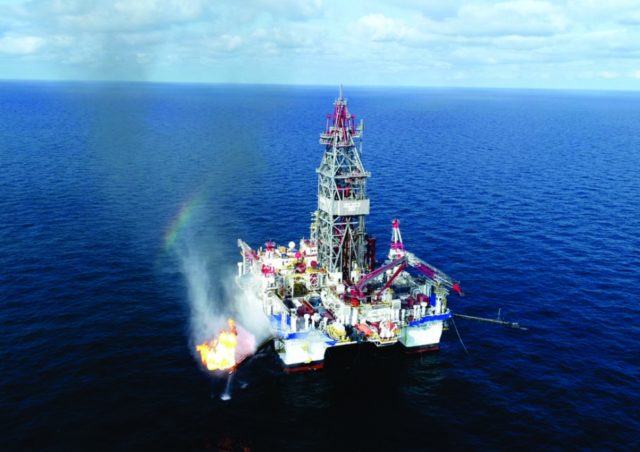 The construction of the semi-submersible drilling rig of the 6th generation named after Heydar Aliyev, started in 2013 after decree of President Ilham Aliyev, who as well participated in its official opening on the Caspian Sea. The drilling rig has been operating since early 2018 and has successfully completed drilling operations on ABD-001 well of Absheron field.

Testing of the well and reserves assessment is being currently completed.

The semi-submersible drilling rig of the 6th generation named after Heydar Aliyev was constructed on the territory of Azerbaijan Republic under the management and supervision of the Caspian Drilling Company.

It should be noted that due to efficient procurement planning, timely construction schedule and strict project management, Caspian Drilling Company has successfully completed the construction of the rig, saving more than $100 million, in comparison with the project’s initial budget.

The rig is generally regarded as one of the most unique in the world for its technological qualities and drilling features, with the most modern and up-to-date technological equipment of the oil and gas industry.

Its total length is 106.5 meters, its width is 69.5 meters and its height is 130 meters. Its total weight is 26,000 tons. Drilling operations can be performed in down to 1 km of water depth. The drilling depth is 12.2 km. This allows drilling of even the deepest wells.

It should be noted as well that record deepest well in the Caspian Sea (ABD-001) was drilled by the Caspian Drilling Company from semi-submersible drilling rig named after Heydar Aliyev at the Absheron field – 7411 meters.

The loading capacity of the rig is 5600 tons, and the water capacity is 47,500 tons. Maximum number of personnel is 160 people. 2,395 people were employed for the rig construction and about 80% of the hired personnel were the citizens of Azerbaijan.

-How would you assess the initial operation of the semi-submersible drilling rig named after Heydar Aliyev?

-It is not a secret that in global practice there are frequent cases of interruptions and failures in drilling operations carried out by newly constructed drilling rigs.

This is often due to the fact that the equipment installed at the initial stage may be not compatible with each other, and that there is a need for specific adjustments.

It should be noted with pleasure that there were neither interruptions nor failures observed during the initial drilling operation, carried out by the semi-submersible drilling rig named after Heydar Aliyev after the completion of its construction.

This is a clear indication of the professionalism and the sense of responsibility shown during the construction of the semi-submersible drilling rig named after Heydar Aliyev and is a result of our hard work as well as dedicated efforts.