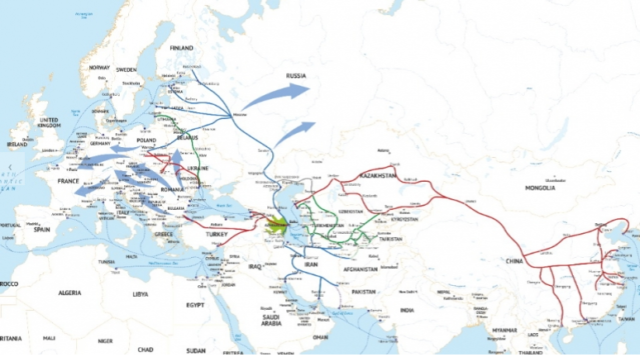 Another container block train has been launched from Xi’an city of the People’s Republic of China heading west to Europe. A destination point of the train consisting of 42 containers is Prague, a capital city of the Czech Republic.

This train, which runs along the Trans-Caspian International Transportation Route, will be the first ever freight train to reach Europe travelling uninterruptedly via the Baku-Tbilisi-Kars railroad and further the Marmaray railway tunnel in Turkey. That is to say, the container block train from Xi’an to Prague will uninterruptedly travel from Baku to Europe only by rail. The solemn ceremony of welcoming the travelling train is expected to take place in Istanbul.

The container train is carrying Chinese-made home appliances to Czech Republic. Responsible operator for this train is a consortium of the Trans-Caspian International Transportation Route. Azerbaijan is represented in this consortium by ADY Container LLC, a subsidiary of Azerbaijan Railways Administration.

Another leap forward for increasing freight traffic via the “Middle Corridor” was an important agreement between Azerbaijan’s ADY Container LLC and China’s Xi’an Continental Bridge International Logistics Co. Ltd, signed at the 2nd “One Belt, One Road” Forum, held in Beijing in April 2019. The agreement sets out more enhanced cooperation on movement of container trains along Trans-Caspian International Transport Route. According to the agreement, both companies plan to launch a total of 30 container trains by the end of 2019, with 20 container trains already launched so far.