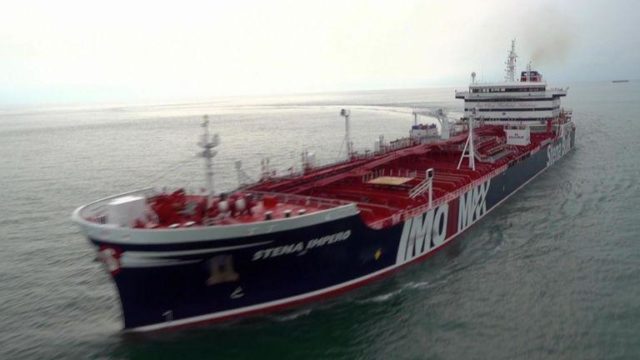 The British-flagged Stena Impero tanker arrived at Dubai’s Port Rashid on Friday after sailing out of Iranian waters, according to Refintiv shipping data, after it was detained in July during a row with Britain that has stoked tensions in the Gulf, Trend reports citing Reuters.

The Stena Impero left Iran’s Bandar Abbas port on Friday morning bound for Dubai, where the crew will be repatriated, the vessel’s Swedish operator Stena Bulk said, after being detained for 10 weeks.

The ship was seized by Iran’s Revolutionary Guards in the Strait of Hormuz, a major oil shipping route, for alleged marine violations two weeks after Britain detained an Iranian tanker off the territory of Gibraltar. The Iranian ship was released in August.

“It reached international waters,” Stena Bulk Chief Executive Erik Hanell told Reuters in a text message after the Stena Impero began sailing, adding that the ship’s master “reported that all crew members are safe and in high spirits following release.”

He said the crew would receive medical checks and be de-briefing in Dubai in the United Arab Emirates, on the opposite side of the Gulf, before traveling home to their families. Seven of the 23 crew were freed earlier this month.

The seizure of the ship ratcheted up tension after attacks in May and June on other merchant vessels in Gulf waters, which the United States blamed on Iran, a charge Tehran denied.