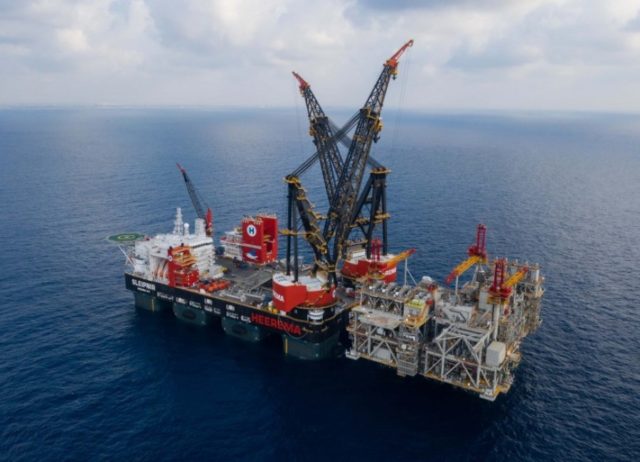 World record was made by Heerema’s SSCV Sleipnir upon lifting 15,300 tons, for Noble Energy’s Leviathan Development in Mediterranean waters, as we reported on 8th September, 2019.

The platform topside decks – which are 102 meters long, 80 meters wide and weigh 25,000 tons – will be located approximately 10 kilometers from the shore in a water depth of 86 meters.

Noble Energy stated that, next phase is to conduct a series of commissioning tests before delivering first commercial gas sales, which is on track to begin by the end of 2019.

Assembly process was anticipated to take place over a four-week period in September, and the area will remain closed to maritime traffic.

Noble Energy will conduct a series of commissioning tests before initiating commercial gas flow before the end of 2019.

Approximately two weeks ago, Sleipnir installed two main topsides with a total weight of 24,500 tons in less than 20 hours, for the Leviathan development project.

According to HMC, Sleipnir was selected by the company in order to save budget on this job as, SSCV is capable of lifting large and commissioned modules, the installation process takes less offshore time and is therefore less costly.

The huge vessel is designed for heavy lifting operations, with the reinforced deck area measures 180 meters by 98 meters and is fitted with two revolving cranes, can lift up to 20,000 tons in tandem, which were tested in the last week of June.

Field is located 125 kilometers west of Haifa, was one of the largest natural gas finds in the world in the last decade.