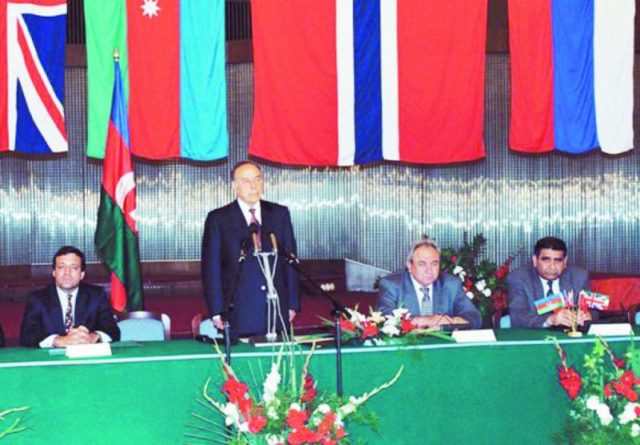 Twenty-five years have passed since the signing of the Contract of the Century on the exploration and development of the Azeri-Chirag-Gunashli block of offshore oil and gas fields on September 20, 1994. The celebration of professional holiday – the Oil Workers Day by the Azerbaijani oil industry workers is timed to this date.

The Contract of the Century may rightfully be considered the basis that determined the main trends in the Azerbaijani oil strategy, laid down by Azerbaijani national leader Heydar Aliyev and turned Azerbaijan into one of the fastest growing countries in the world.

The oil and gas sector continues to remain the locomotive of the Azerbaijani economy. After gaining independence, the country achieved great success in the development of the industry in which stagnation was observed during the last years of the Union of Soviet Socialist Republics (USSR). The industry started to rise up.

A number of contracts for the development of onshore and offshore fields were signed. As a result, Azerbaijan and partners began to develop such gigantic hydrocarbon deposits as the Azeri-Chirag-Gunashli block of oil and gas fields and Shah Deniz gas condensate field in the Caspian Sea.

Azerbaijan, which established itself as a reliable supplier of oil to the world market long ago, is on the verge of supplying its own gas to the European market. The Southern Gas Corridor will allow Europe to diversify its sources of hydrocarbon production and increase energy security, while Azerbaijan – to find a new market in Europe.

The gas has been exported to Turkey since last year through the expansion of the South Caucasus gas pipeline and the construction of the Trans-Anatolian Natural Gas Pipeline (TANAP) gas pipeline as part of the second stage of the field development.

The gas of Azerbaijan, total reserves of which reach about three trillion cubic meters, will be supplied to the European market after the commissioning of the Trans-Adriatic Pipeline (TAP) in 2020.

The initial throughput of TAP will be 10 billion cubic meters of gas per year with the possibility of expanding up to 20 billion. Before the commissioning of TAP, which begins on the Turkish-Greek border, Azerbaijani gas will be supplied via Turkey through TANAP. Before the commissioning of TANAP, gas will be supplied via the 700-kilometer South Caucasus gas pipeline, the capacities of which will be expanded.

After 25 years from the signing of the Contract of the Century, the date of September 20 was once again perpetuated when the ceremony was held on the same day. On that day the project of expansion of the South Caucasus gas pipeline was launched, which actually marked the beginning of the implementation of the Southern Gas Corridor project.

The potential of the gas transportation infrastructure, which has already been practically created within the Southern Gas Corridor, will allow in the future ensuring the transportation of additional volumes of gas from other Azerbaijani fields, as well as gas from other countries of the Caspian Sea region to the European market. This will contribute to the strengthening of export potential and development of transit potential of the country. 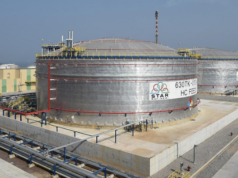