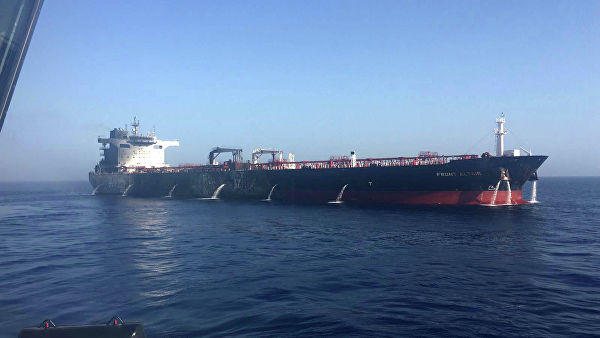 Britain’s Mediterranean territory Gibraltar decided on Thursday to free a seized Iranian oil tanker, but did not immediately indicate when or if the ship would set sail after the United States launched a new, last-minute legal bid to hold it.

The Grace 1 was seized by British Royal Marine commandos in darkness off the coast of the territory at the western mouth of the Mediterranean on July 4 on suspicion of violating European Union sanctions by taking oil to Syria, Trend reports citing Reuters.

Two weeks later, Iran seized a British-flagged tanker in the Strait of Hormuz leading into the Gulf.

The two tankers have become pawns in the standoff between Iran and the West, their fate tangled up in the diplomatic differences between the EU’s big powers and the United States.

Gibraltar Chief Minister Fabian Picardo decided to lift the detention order after formal written assurances from Tehran that the ship would not discharge its 2.1 million barrels of oil in Syria.

“In light of the assurances we have received, there are no longer any reasonable grounds for the continued legal detention of the Grace 1 in order to ensure compliance with the EU Sanctions Regulation,” Picardo said.

However, Gibraltar officials did not make clear whether the U.S. legal bid would mean the ship would have to be detained further, or if so, for how long.

“Separately, the United States Department of Justice has requested that a new legal procedure for the detention of the vessel should be commenced,” Picardo said. “That is a matter for our independent Mutual Legal Assistance authorities who will make an objective, legal determination of that request for separate proceedings.”

Iran said the ship would sail shortly. Foreign Minister Mohammad Javad Zarif characterized the U.S. bid to prevent it from leaving as “piracy”.

“America desperately tried to block the release of the tanker at the last minute, but faced a miserable defeat,” Iran’s ambassador to London, Hamid Baeidinejad, said on Twitter.

“All preparations are done for the tanker to sail into open waters, and the vessel will soon leave Gibraltar.”