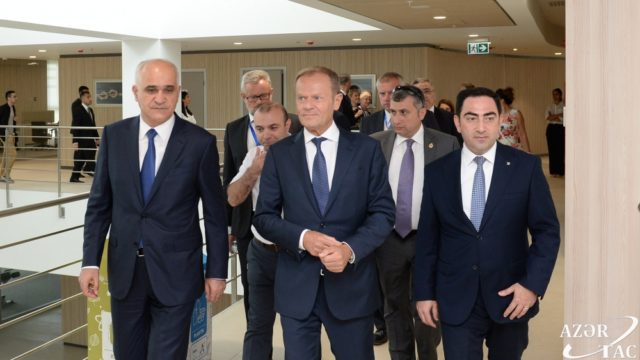 President of the European Council Donald Tusk has familiarized himself with the Baku International Sea Trade Port located in the Alat settlement.

Minister of Economy Shahin Mustafayev informed Donald Tusk of the activity of the port. He said that President of the Republic of Azerbaijan Ilham Aliyev attended the opening of the Baku International Sea Trade Port Complex on May 14, 2018. The minister noted that the construction of the port marks a momentum in President Ilham Aliyev’ policy of transforming the country into a regional transportation hub.

Director-General of the Baku International Sea Trade Port Taleh Ziyadov informed the President of the European Council about the advanced IT systems applied at the port.

The port occupies a total area of 117 hectares. The complex has 12 berths with an annual cargo handling capacity of 15 million tons, including 100,000 units of 20-foot containers.