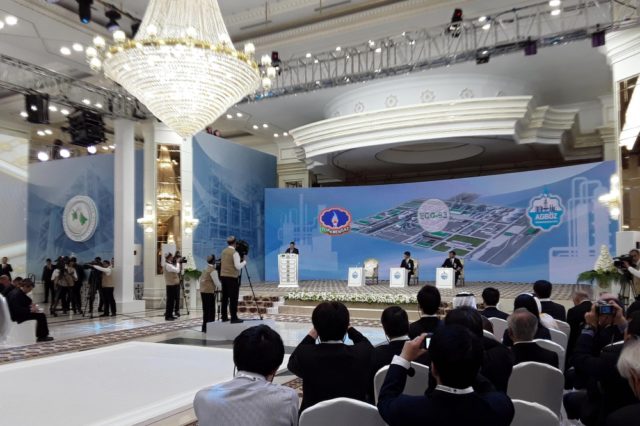 “The first 60 tons of shipment of gasoline produced from natural gas in Turkmenistan will be supplied to Afghanistan as humanitarian aid,” said President of Turkmenistan Gurbanguly Berdimuhamedov as he addressed the opening ceremony of the plant built in Ovadandepe settlement of Turkmenistan’s Ahal province.

The ceremony was attended by foreign guests, heads of diplomatic missions working in Turkmenistan, heads of ministries and profile agencies of the country, representatives of foreign companies, tourists, as well as representatives of international and national mass media.

The foundation of the gas chemical complex in Ovadandepe, to be the first in the world to produce synthetic fuel from natural gas on an industrial scale, was laid on August 26, 2014. President Berdimuhamedov attended the foundation laying ceremony. The plant was built in accordance with the agreement between the Turkmengas State Concern and the Japanese-Turkish consortium consisting of Kawasaki Heavy Industries, Ltd and Ronesans Endustri Tesisleri Insaat Sanayi ve Ticaret A.S. The project is worth about $1.7 billion.

The plant will process 1.785 billion cubic metres of natural gas annually, producing 600,000 tons of gasoline a year among other liquid fuels.