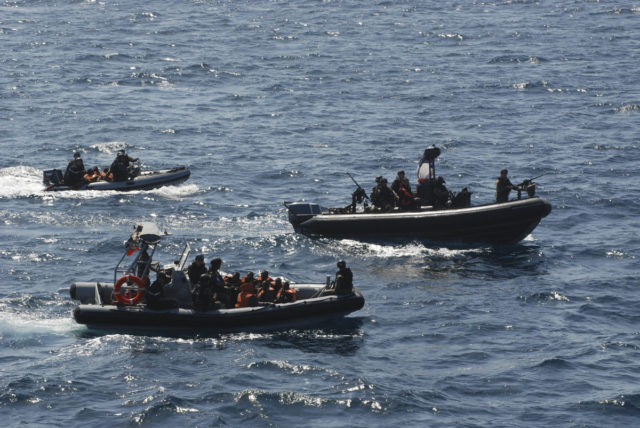 The oil coasts of West Africa are a nest of “sharks” that go around.

In 2009, navigating the waters off the coast of Somalia was a path with bad omens. The pirates were stalking and that was a sea of ​​”sharks”. So much so that the armies of different powers decided to move their fleets of war to the Indian Ocean , patrol and persecute the evildoers, mostly Somalis seeking with their “outrages” to collect rewards. For 2011, the effort paid off and piracy announced its withdrawal.

The pirates decided to move to less controlled areas on the other side of the African continent, which now the waters that bathe the beaches of West Africa are  the most dangerous sea in the world.

A report by One Earth Future, which annually disseminates the state of maritime piracy, labeled the rich African oil coast in this way.

And he maintains that while pirates come in descent in other parts of the planet, they thrive there with worrying vitality.

Depending on where they act, pirates will be  pirates or mere thieves.

That is to say if they attack a merchant ship on the high seas, where there is no jurisdiction of any country, there are pirates.

If they operate within the territorial waters of a country and within port areas, they are thieves who steal in the sea.

But the One Earth report uses both cases to refer to the increase in piracy in the region, and in fact accounted for 112 acts of piracy in 2018.

Pirates do not just go for the huge tankers or oil tankers, which carry crude or gas from Nigeria or Ghana. Commercial ships and even smaller ships can fall into their networks.

The coasts in front of Nigeria are the most vulnerable, partly because of what is already called the “petro-piracy”, which searches for oil tankers.

The Nigerian or Lagos ports, where these ships load or unload, do not escape from the pirates either.

And then there are the kidnappings to ask for ransom . These pirates operate in a wider area that includes the coasts of Benin, Ghana, Nigeria, Congo-Brazzaville and Cameroon.

Rich “harvests” at sea, political instability, lack of law enforcement and poverty on land are factors that have contributed to the rise of piracy.

Most of the affected sailors are not from the region. About half are from the Philippines, followed by India and Ukraine.

Unlike the East Coast sister (where the multinational patrol effort coupled with strong local action inland improved the situation), in West Africa there is a “resurgence of transnational crime,” lamented recently, the president of Togo Faure Gnassingbé.

But there is another area in trouble, an area with many problems, in reality: Venezuela.

Attacks against maritime transport in the Caribbean and off the coasts of Latin America have been growing. Venezuela, in particular.

The country managed by Nicolás Maduro has become a point of access for piracy.

The reason: “political and economic instability is an important factor,” says Lydelle Joubert, piracy expert at One Earth Future