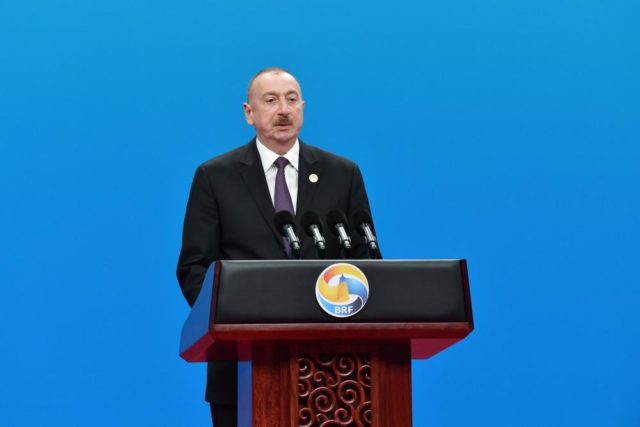 Today business climate in Azerbaijan is one of the most advanced in the world, Azerbaijani President Ilham Aliyev said.

President Aliyev made the remarks at the Second Belt and Road Forum for International Cooperation in Beijing on April 26.

“The creation of modern transportation infrastructure is one of the priorities of Azerbaijan,” the president said. “Using our geographical location we invest in building bridges between Asia and Europe. Despite being a landlocked country we transformed Azerbaijan into one of the international transportation hubs. We have built diversified railroad network connecting us with our neighbours.”

“Some 15,000 km of roads and highways were built in Azerbaijan during the last 15 years,” the president said. “According to the assessment of the Davos World Economic Forum Azerbaijan is ranked number 34 with respect to the quality of growth.”

“Thus, Azerbaijan became an important transit country with developed transportation infrastructure,” the president said. “After the inauguration of Lapis Lazuli last year it was connected to Baku-Tbilisi-Kars railway increasing the transit potential of Azerbaijan. Today Azerbaijan provides transit opportunities for a growing number of countries. Azerbaijan has a largest fleet of 260 ships in the Caspian Sea. There is also a shipyard in Azerbaijan built relatively recently capable of producing all types of vessels.”

“By creating modern transportation logistic infrastructure we not only transform our country into important transportation hub but also contributed to the cooperation with countries involved in East-West and North-South Corridors,” the president said. “International transportation projects strengthen the cooperation between countries and peoples. The Belt and Road initiative not only create the opportunities in transportation but enhances trade, tourism, people-to-people contacts, serve the cause of stability and security and peace in Eurasia.”