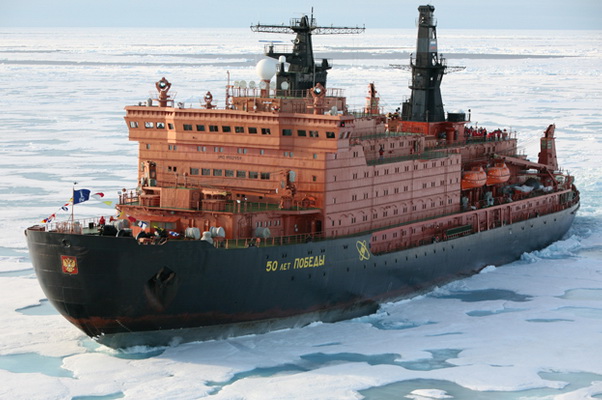 The world’s largest nuclear-powered icebreaker 50 Years of Victory will make five tourist flights to the North Pole in 2019. The first cruise flight is scheduled for mid-June, according to the press service of the Atomflot Federal State Unitary Enterprise (part of the Rosatom Atomic Energy Society).

“Cruises on the nuclear icebreaker“ 50 Years of Victory ”will begin in mid-June and last until August. In total, five flights are planned, ”the agency’s source said. Earlier Atomflot reported that tickets are being bought up a year in advance.

The world’s largest nuclear-powered icebreaker 50 Years of Victory has been operating cruise flights to the North Pole since 2008. Until that time, the nuclear icebreaker “Yamal” worked on the tourist watch. And for the first time on the northernmost point of the planet, tourists were delivered by the nuclear-powered “Russia” on August 8, 1990. Cruises are very popular, mainly among foreign tourists.

The journey takes about 11 days. About five days are needed to reach the geographical point of the pole, then the icebreaker visits the islands of the Franz Josef Land archipelago.

“50 Years of Victory” is the largest nuclear-powered icebreaker in Russia and the world, the last built in the country. Its construction was carried out at the Baltic Shipyard in St. Petersburg with interruptions from 1989 to 2007. Previously, the icebreaker worked on escorting vessels in the Arctic as part of projects for the development of the Arctic shelf.

In particular, on the sea section of the Kara Sea and on the Sea Canal in the Ob Bay, the icebreaker provided escorts for Arctic projects Yamal LNG, Gazprom Neft (Novoportovskoye field) and UK VostokUgol.