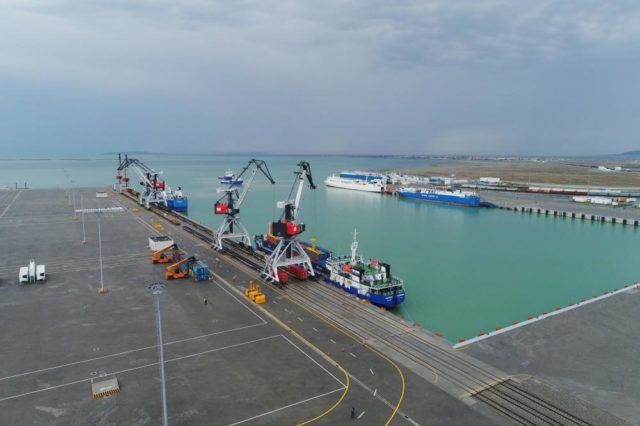 Tajikistan is considering the possibility of increasing the transportation of its goods through the Baku International Sea Trade Port.

Minister of Economic Development and Trade of Tajikistan Nematullo Hikmatullozoda met with the Director General of this Port Taleh Ziyadov a few days ago as part of his visit to Azerbaijan.

The minister was provided with detailed information on the activities of the port and proposed to widely use its capabilities for the transport of goods in Tajikistan, news.tj reports citing the press service of the Ministry of Economic Development and Trade of Tajikistan.

It was particularly noted that the Baku Sea International Trade Port was commissioned in 2018. Its territory is 117 hectares, the port can simultaneously receive up to 12 ships, and its carrying capacity is currently 15 million tons of cargo per year. For a comprehensive use of the potential of the port, a free economic zone has been created next to it.

“The use of the port will contribute not only to an increase in cargo traffic, but also to strengthen the regional cooperation,” Ziyadov concluded.

Tajikistan is forced to transport its cargoes bypassing Turkmenistan from the beginning of February of this year, which, for still unknown reasons, does not allow Tajik vehicles to enter its territory.

Delivery of Tajik cargo to the Middle East or goods imported from this region have been transported by the Caspian Sea for almost two months : using the ports of Baku and Aktau (Kazakhstan).

The Baku International Sea Trade Port in Azerbaijan’s Alat settlement is expected to become one of the leading trade and logistics hubs of Eurasia.The New Port in Alat is a transportation hub linking the west (Turkey & EU), south (Iran & India) and north (Russia). Situated in the vicinity of the regions of Azerbaijan, it will also increase its connectivity as an efficient hub and so increase the volume of cargo being handled. In addition, new port location is linked to existing highways and railways, connecting the port to the inland regions of the country.

Azerbaijan and Tajikistan established diplomatic relations on May 29, 1992. The cooperation between the two countries reached a new level in 2008, when the intergovernmental commission on trade and economic cooperation was launched. It coordinates the realization of economic ties and develops new proposals for future cooperation.

The contractual and legal framework of cooperation is secured by more than 40 agreements in trade, economic, banking, tax, cultural and investment spheres. The priority areas of economic cooperation between Azerbaijan and Tajikistan are non-ferrous metallurgy, agro-industrial sector, energy, light industry, transport and communications.