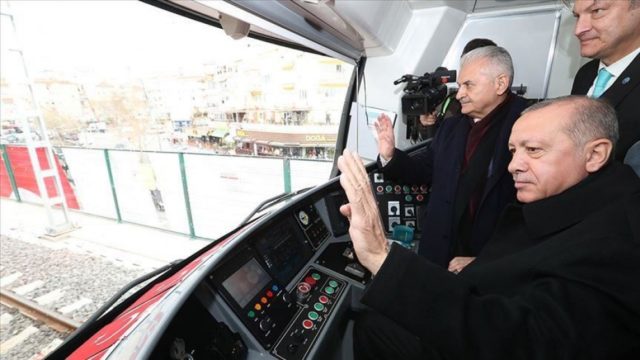 A commuter train line along the Sea of Marmara connecting Istanbul’s European side district of Halkali with Gebze district of Kocaeli province has opened on Tuesday, Anadolu Agency reported.

The Gebze-Halkali commuter train line was inaugurated by President Recep Tayyip Erdogan with a ceremony in Istanbul’s Kartal district.

Erdogan drove the train from Kartal to Maltepe station on the city’s Asian side during its first service.

Some 1.7 million passengers are expected to use the 63 kilometer-long (39 miles) train line on a daily basis. Through the new line, which has 43 stations, it will take less than 70 minutes to complete the same distance.

The Gebze-Halkali train line will also be Istanbul leg of Iron Silk Road, which will run from London to Beijing, Erdogan said.

With this line, last stop of high-speed trains in Istanbul will not be the Pendik district of Istanbul on the Asian side, they will run through Halkali district on the European side, he added.

People in 10 districts of Istanbul will directly benefit from the line, the president said, adding that it would ease Istanbul traffic very significantly.

All the rail systems in Istanbul including Marmaray undersea railway tunnel and high-speed train lines will also be integrated with the Gebze-Halkali line, according to Transport and Infrastructure Minister Cahit Turan.