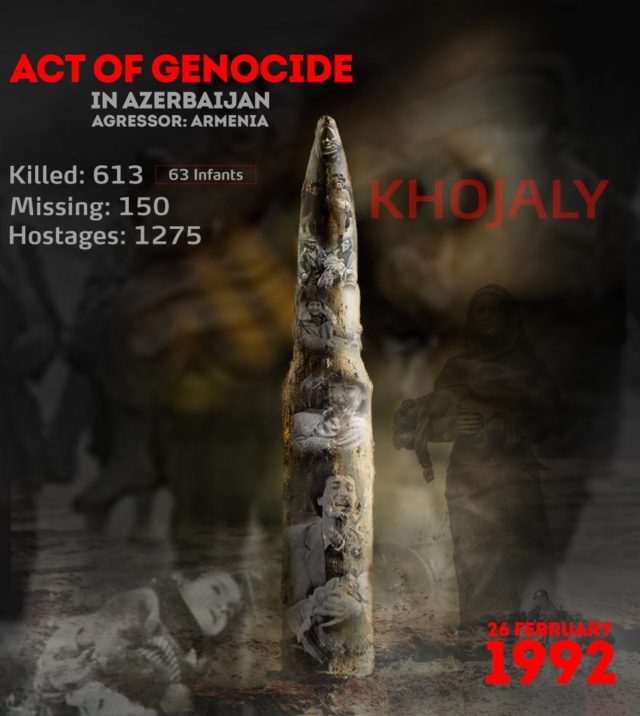 27 years ago the Khojaly genocide was committed and Khojaly city was occupied by the Armenian armed forces, reportedly with help of the post Soviet army’s 366th Motor Rifle Regiment.

Today, Azerbaijan marks the next anniversary of the bloody tragedy.

Report informs, on the night of February 25 to 26, 1992, Armenian forces, with the help of the former Soviet 366th Motor Rifle Regiment invaded Khojaly village, which was under blockade since October 1991, at which point all roads leading to the city were blocked, and the only available transport was via helicopter. On the evening of February 25 constant gunfire began. 2,500 civilians remaining in the village left their territory with the hope to reach Aghdam. Armenians had started to shot the civilians.

613 people fell victim to enemy fire. As a result of this tragedy, 613 Khojaly civilians were killed in which 63 children, 106 women, and 70 elderly civilians are included. 8 families were completely annihilated. 130 children lost one of their parents, and another 25 lost both of them. 76 out of 487 people wounded by an enemy bullet were children. 1275 Khojaly residents were taken prisoner and 150 went missing.

Azerbaijan’s nationwide leader Heydar Aliyev unveiled the essence of Khojaly genocide and in February, 1994, the Parliament of the Republic of Azerbaijan gave legal and political assessment of this crime, issuing a resolution. The document describes causes of the tragedy and its perpetrators.

A monument to the victims of Khojaly genocide was erected in Khatai district of Baku city.

Continuing the successful political path paved by the nationwide leader Heydar Aliyev, the President of the Republic of Azerbaijan Ilham Aliyev has always underlined that the only possible solution of Armenia Azerbaijan Nagorno-Karabakh conflict could be within the sovereignty, territorial integrity and internationally recognized borders of Azerbaijan, and has stated about the necessity for the unconditional withdrawal of Armenian armed forces from the occupied territories of Azerbaijan and prosecution of those who committed the act of genocide.

The Heydar Aliyev Foundation is systematically and consistently working to bring the facts of the Khojaly genocide to the world. With the support and organization of the Heydar Aliyev Foundation, a series of events, exhibitions and memorial events are held in a number of countries around the world within the framework of this project. “Justice for Khojaly” international campaign initiated by Leyla Aliyeva, the Vice-President of the Heydar Aliyev Foundation, General Coordinator of the Islamic Conference Youth Forum on Intercultural Dialogue, is one of the purposeful measures taken for dissemination in the world of the true information about the Khojaly genocide and recognition of this tragedy as an act of genocide committed against the people of Azerbaijan. Thus, relevant resolutions have been made on this genocide act in several countries. It is no coincidence that parliamentarians of 51 countries adopted the relevant resolution on recognition of the Khojaly tragedy as an international genocide at the 7th session of the Parliamentary Union of the member states of the Organization of Islamic Cooperation in Palembang, Indonesia in January 2012.

“Justice for Khojaly” international information campaign is being successfully implemented in dozens of countries and is aimed at the recognition of the tragedy at the moral and political level. At present, the parliaments of Pakistan, Mexico, the Czech Republic, Colombia, Bosnia and Herzegovina and others have recognized Khojaly tragedy as genocide and criminal act against Azerbaijan. In addition, the Khojaly genocide was recognized by more than 20 state legislatures of the United States.

Notably, the internally displaced persons (IDPs) from Khojaly temporarily placed in 50 cities and regions of Azerbaijan.